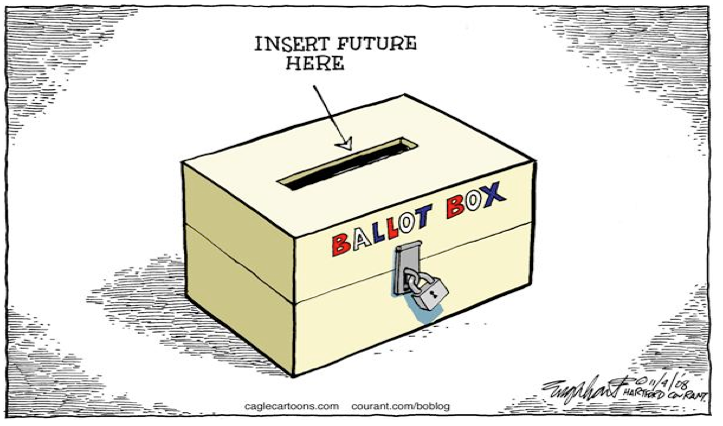 THE EPPERHART REPORT--Propositions, initiatives, measures, referenda, annoying – call them what you will, but they have been an integral part of California democracy for more than a hundred years. More than any other state, California relies on its citizens to propose and make law.

It all started when Hiram Johnson, a progressive Republican, was elected governor in 1910. He crisscrossed the state in an automobile railing against the power of corporations, particularly the Southern Pacific Railroad. Big money determined who would run for office, who would win, and how they would vote once they got to Sacramento.

Johnson won his election and pushed through a number of reforms reducing the power and influence of corporations in the Golden State. Most notably, in 1911, the people got the right to introduce legislation in the form of ballot initiatives and decide at the polling place whether or not they would become law.

Even now, 105 years later, Proposition 59, asks voters to urge legislators to support an amendment to the U.S. Constitution that would overturn the Supreme Court’s decision in the Citizens United case and allow restrictions on campaign contributions and spending. Some things never change.

Perhaps the greatest impact made by a ballot initiative occurred in 1978 when, by an overwhelming majority, Californians adopted Proposition 13. It rolled back property tax rates and capped annual increases. It also required a two-thirds vote to approve certain tax increases. In the years since, despite ongoing criticism, the impact of Prop. 13 has only been expanded and never reduced. It is known as the “third rail” of California politics. Touch it and you die.

In 1994, Proposition 187 called for denying government services to undocumented aliens. Despite passage with 60 percent approval, it was never implemented due to a court injunction that stands to this day. What’s notable is not the measure, but the effects of the campaign supporting it. The pro-187 advertising run by the Republicans was viewed by many as racist and is considered to have triggered a mass movement of Hispanic voters to the Democrats.

In 1998, voters passed a law, Prop. 227, to outlaw bilingual education in public schools. This year, Prop. 58 would repeal most of that ban. If it passes, it will be a clear demonstration of the demographic shift in California’s electorate.

If adopted, two initiatives may have the most far-reaching consequences.

The first, Proposition 62, proposes abolishing the death penalty in California. Currently, there are 741 prisoners awaiting execution, more than any other state. There have been 13 executions in California in the last 40 years. The reality is that a death row inmate is more likely to die of old age than lethal injection. (Another measure, Prop. 66, seeks to speed up the appeals process in an effort to ratchet up the number of executions.)

The second, Proposition 64, would legalize the recreational use of marijuana. It many ways, it merely recognizes what is already a fact of life. But, acknowledging that fact legally and normalizing its use in the same manner as tobacco and alcohol is a big step for government.

Finally, the state Democratic and Republican parties disagree on just about every measure. However, they both recommend a no vote on Proposition 60, which would require the use of condoms in adult films. In this time of political polarization, it’s good to know there’s something that can unite us.

(Doug Epperhart is a publisher, a long-time neighborhood council activist and former Board of Neighborhood Commissioners commissioner. He is a contributor to CityWatch and can be reached at: Epperhart@cox.net) Prepped for CityWatch by Linda Abrams.