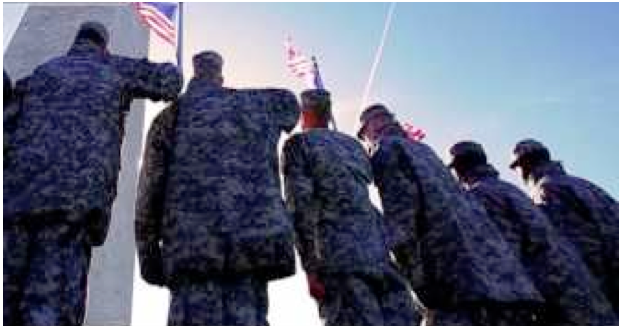 GELFAND’S WORLD-It's that time of year when your television screen fills up with ads attacking ballot propositions. But have you noticed that the political ads almost never tell you what the propositions would actually do? Instead, the screen is filled with young women running through fields of daisies or, in one recent approach, the TV screen is filled with spokesmen wearing military paraphernalia who are swearing that Proposition 61 is unfair to veterans (photo above). There is an opposing ad that has a spokesman -- also dressed up in military paraphernalia -- explaining that Prop 61 won't hurt vets.

Nobody tries to inform us what Prop 61 would actually do.

Or there is Prop 56. We get a mom and her young child, with the mom asking us to help prevent her child from someday taking up smoking. What we don't get is a simple description saying that Prop 56 raises the tax on a pack of cigarettes by two dollars.

Funny thing about these commercials. In the anti-Prop 61 ads, the final screen showing the names of the major funders flicks on and off so fast that you can't quite follow. You have time to read the first few words, but they are generic made-up titles for organizations that don't sound genuine. We could make up our own organization and call it something like Proud Americans for Preserving Veterans' Rights and Freedom, and stick it on the end of one of these commercials, and who would know that it was created by a giant pharmaceutical company, or at least by the advertising agency that was hired to carry water for that company? But if you look closely (don't blink), you can find the names of some pretty heavy hitters in the drug industry near the bottom of the screen.

Shouldn't the television stations provide an explanation for what each proposition does? Isn't this part of the news? This is a major failure on the part of commercial broadcast television in its ostensible duty to serve the public interest.

But there is the Official Voter Information Guide sent out by the office of the Secretary of State. You probably got it in your mail a few days ago. May I point you to what is called the Analysis by the legislative analyst. It's on the first page of each Initiative section, right below the Official Title and Summary. For Prop 61, the explanation begins on page 72.

Here is the first paragraph of the summary for Prop 61:

Prohibits state agencies from buying any prescription drug from a drug manufacturer at any price over the lowest price paid for the same drug by the United States Department of Veterans Affairs, except as may be required by federal law.

There is one little exception that the opponents are attacking, but fundamentally, the law is ostensibly an attempt to allow California to take advantage of how the VA achieves discounts based on bulk purchasing.

That doesn't seem like such a complicated idea. Whatever the VA pays, the state pays. No more and no less. It's no more because that is what the law would require. It's no less because the drug companies aren't likely to accept anything less from California than what they already are getting from the VA.

So what's the beef? From the standpoint of the drug companies, it's potentially a very big beef. If California can enforce this standard for drug pricing, then what's to stop any other state from doing the same? In an era of the $600 epipen, there are a lot of individual consumers and state purchasing agents who would like to see a more balanced approach to drug pricing. The remedy for monopoly pricing is either more aggressive antitrust enforcement or collective bargaining on the part of consumers.

For most of us, the collective bargaining is done by Blue Cross and Blue Shield. For VA patients, the collective bargaining is done by the Department of Veterans Affairs. Apparently the VA does pretty well in its negotiations. One reason for this is that the VA has traditionally been willing to remove a drug from its formulary if the administration feels that it is overpriced and that there are alternative drugs available. Now the state of California would like to take advantage of the system of price negotiations that already exists.

You can see how the pharmaceutical industry would feel endangered by the most populous state trying to reduce its drug spending this way. If California has been paying $100 for some prescription drug and the VA is getting it for $70, what is the manufacturer to do?

Well, one strategy would be for the drug company to start charging the VA the same $100 as California (and most everybody else) has been paying. That seems to be what the anti-Prop 61 ads are implying. The ballot arguments in the voter guide say pretty much the same thing. What's missing from this argument is that the VA has been enforcing its price strategy pretty well, and isn't likely to back down.

There is a simpler argument against Prop 61 based on public policy considerations. We need a better method for negotiating drug pricing that is national in scope and is enforced at the federal antitrust level. The problem is that drug company money keeps the congress in check, so we aren't likely to see such legislation anytime soon. California voters are left with this alternative. It's imperfect, but it's something.

(Bob Gelfand writes on science, culture, and politics for City Watch. He can be reached at amrep535@sbcglobal.net)