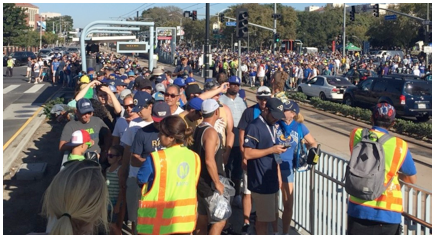 SPORTS POLITICS--You may have heard that the National Football League’s Rams are back in Los Angeles. The football is no doubt exciting, but the team’s presence has also elevated Southern California conversations about parking, congestion, transit, and traffic.

Now through 2018, the Rams play home games at the Coliseum in Exposition Park, a stone’s throw from the Metro Expo Line. (see photo above) In the future, the Rams will be playing at a new stadium under construction in Inglewood. The new stadium, expected to be completed by 2019, will be just over a mile from Metro’s under-construction Crenshaw/LAX light rail line.

Though SBLA will offer some advice after the jump, first a couple of caveats:

The Source asked for suggestions on what Metro can do differently. SBLA has some ideas below.

These are all relatively low cost programs, not infrastructure-intensive people-mover construction. None of these will carry tens of thousands of riders on day one, but expanding transportation options for game day can give people choices. Diverting a thousand fans here and a hundred fans there can take the edge off of the surge that occurs at the end of the game. In expanding options, it is important to benefit not only sports fans, but also provide ancillary benefits to the rest of Metro’s riders, and to the neighborhoods impacted by car-choked streets around the stadium.

While these recommendations apply to Rams games, they also apply to other sports and other stadiums, and even concerts and other events. Even though the Rams will be moving in 2019, Exposition Park will continue to host large-scale events, including, soon, Major League Soccer.  Programs piloted now could be transposed to Inglewood in 2019.

(Joe Linton is the editor of StreetsblogLA ... where this perspective was first posted. He founded the LA River Ride, co-founded the Los Angeles County Bicycle Coalition, worked in key early leadership roles at CicLAvia and C.I.C.L.E., served on the board of directors of Friends of the LA River, Southern California Streets Initiative, and LA Eco-Village.) Photo: Metro.