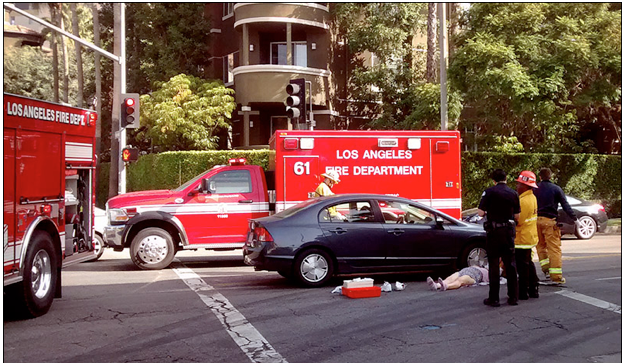 RIDING WITH RICHARD--Last night I sat through a four and a half hour meeting of the Mid-City West Community Council. Sitting for an hour, let alone four, is not my preference, but a few months ago, friends and neighbors urged me to run for the Council’s board, and I finally acceded to their wishes. I indulged in exactly two (2) hours of campaigning, but, much to my dismay, I won anyhow. So there I was, along with thirty-four other board members, and a roomful of contentious neighbors.

Contentious because of, among other things, a proposal to implement a road diet along that deadly part of Sixth Street that runs through the Miracle Mile. Crashes, caused by speeding, swerving cars, are a weekly occurrence there; injuries are frequent, and there have been deaths. Neighbors just trying to get home or to the store or the park. A woman was killed standing on the corner waiting for the light to change, her body broken by cars spinning away from yet another collision….

Everyone agrees that cars must be tamed along Sixth, but not everyone agrees on the means. Many people’s immediate reaction to a road diet is to assert that reducing the number of through lanes will “of course” increase congestion. This is not, in fact, true, as dozens, perhaps hundreds, of real-world observations have revealed. But in this sad time of “truthiness,” flat-earth theories are given respect that other hypotheses have had to work for. The evening was long.

But many people, on and off the board, spoke at length about both the mechanics and the benefits of road diets, and in the end…the motion passed!

The board will now send its recommendation to the LADOT and the local council member, David Ryu. Whether he will continue his predecessor LaBonge’s suppression of the road diet remains to be seen.

Yes, continue it: because this is not a new road diet. It was first proposed years ago. LADOT’s analysis and most of its design work have been done. In fact, just about everything has been done except actually doing it. Meanwhile, cars crash, neighbors die, and people at a recent town hall said they’re afraid even to walk along Sixth on the sidewalks!

Maybe, just maybe, Ryu can show some spine and support what will, despite overwhelming local support, be a contentious project. If he caves to the naysayers, in the time-honored way of LA council members, well…the gutters will continue to run with blood in the Miracle Mile.

As one of the other board members put it, “This is a moral issue. People are dying while we argue.”

(Richard Risemberg is a writer. His current professional activities are focused on sustainable development and lifestyle. This column was posted first at Flying Pigeon.)