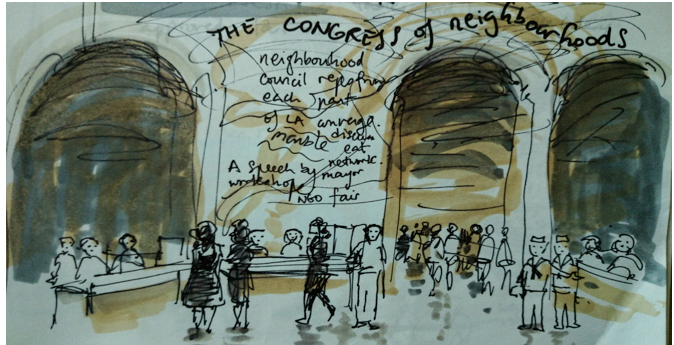 GELFAND’S WORLD--Once a year, City Hall opens its doors to the public for the annual Neighborhood Council Congress. This year, the gathering occurs Saturday, September 24. It's a chance for people who participate in neighborhood councils to network, hear presentations, and meet city officials. I think the congress has done pretty well, but it is ready for some rethinking. What's been missing of late is the old spirit of rebellion that motivated the founding generation. It's that same spirit you see in the pages of City Watch. The public should have their own shot at engaging in such discussions.

Let's start with what's good about attending the Congress: It's a chance to meet folks from all over the city, so you can learn about the issues that other neighborhood councils are facing and how they are dealing with them. It is also a chance to become involved in the regional and citywide organizations that have grown up in response to citywide issues.

Unfortunately, the Congress has tended to shy away from the more political discussions. I suspect that the organizers see these as divisive. Instead, we are being served up an extended civics lesson. Some of it is interesting, and some of it is even useful, but we should consider some bigger ideas (see below).

What you can expect: There will be workshops, training sessions, and a breakout session on a subject I have been writing about here, the need for disaster preparedness.

There will be a lot of sessions that are reminiscent of high school citizenship classes. There is a session on Board Basics, which is, I assume, training in how to participate in a board meeting. There are sessions on land use and code enforcement, outreach, working with city departments, and so on. We can get tips on leadership skills (I wonder how you teach that?), a session on how to manage a committee, and something about clean streets. These are defensible topics, but not door crashers.

Let's quickly explain why the congress is set up this way.

Back around 2001- 2005, neighborhood councils were a new invention in LA, and we all had to figure out how to navigate through the details of forming a brand new council and getting it up and running. Out of this came a few meetings where these subjects were explored in front of hundreds of interested people. For the past few years, the congress has been run by volunteer participants and a few hardy city agency staffers.

So far, so good. The congress provides breakfast, lunch, and a nearly acceptable volume of hot coffee. City Hall has plenty of conference rooms and a regal City Council chamber, all of which get used.

The one thing remaining for us to accomplish is to make the congress into a real congress. Instead of just those goody-goody sessions, I'd like to see a few things added on:

he discussion of cutting City Council pay by half.

Let's have a serious discussion about recreating Los Angeles government as a borough system.

Let's have serious discussions about all the reform suggestions coming from other writers here on City Watch, including Charter changes regarding the city budget.

Let's have a serious discussion about public financing of City Council and mayoral elections.

Let's talk about the limited public comment periods in City Council committee meetings. How many of you are tired of watching that green light - yellow light - red light gizmo run down?

Let's even talk about the way that neighborhood councils were created with an almost total lack of authority, and whether this ought to be changed.

Let's have a serious discussion about putting neighborhood council elections on the regular ballot, probably during the June primary election in even numbered years.

You may have your own ideas for robust discussions. The point is to visit the serious underlying questions rather than just nibbling around the edges of the most superficial problems.

We might also revisit an idea that has been circulating in neighborhood council circles since the beginning. Why not schedule quarterly Town Hall meetings, each dedicated to a particular subject? I'd like to see the Valley Alliance and the LA Neighborhood Council Alliance alternate in sponsoring such Town Halls. They wouldn't replace the annual congress, but they would allow serious people to engage in important discussions.