LGBTQ PERSPECTIVE--California has long been progressive when it comes to LGBTQ rights, proposing bills for same-sex couples to retain rights and marry long before other states did. Despite a several-year period when Proposition 8 was in effect--banning marriage between same-sex couples from 2008 until 2013--California has taken measures to ensure that the LGBTQ community can live, work, and love safely.

One of the ways the state has attempted to make positive changes for the LGBTQ community is with a Respect After Death Act, which ensures that the death certificates of transgender people will reflect the gender they chose to live with. Because gender identity is a huge part of a trans individual’s life, the law is a big win for the equality movement, ensuring that the deceased’s legacy will remain untouched.

The bill, which was co-sponsored by the Transgender Law Center, is meant to help protect the dignity of the deceased.

Executive director Masen Davis says that it “brings us a significant step closer to making sure that all transgender people are able to live – and die – authentically in accordance with who they really are.”

Recently, the University of California took steps to make sure their bathrooms were more gender-neutral and to change their official records to include a name change. The campus also has gender-inclusive athletic facilities and has been rated among the top schools in the country for LGBTQ students, in part because the school’s student insurance plan offers coverage for hormones and surgeries for those in transition.

In another groundbreaking law, California introduced training for all healthcare professionals on how to best care for LGBTQ patients, including “understanding and applying cultural and ethnic data to the process of clinical care, including, as appropriate, information pertinent to the appropriate treatment of, and provision of care to, the lesbian, gay, bisexual, transgender, and intersex communities.” 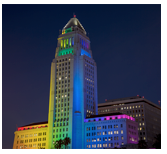 California has also become the first state to protect people from being charged with being a sex worker solely on the basis that they are carrying condoms. Because of the large number of transgender women who have turned to sex work over the years due to discrimination and destitution, women are being profiled by law enforcement and arrested for carrying protection. This law requires the court to state without a doubt that the condoms are relevant to a particular case in order to be used as evidence.

With California taking steps to ensure the legal protection of LGTBQ individuals, it has become something of a safe haven for the community as a whole, especially with laws put into place banning the legal defense of “gay panic,” meaning a person who murders a gay or transgender individual can’t use the defense that they became violent after discovering they were LGBTQ.

Since the state has put measures in place designed to protect members of the gay and transgender community, it has garnered praise from rights groups over the years, as well as from those who have made the move to call California home.

(Caroline Hampton is a teacher and concerned parent. She created OpenEducators.org to make it easier for teachers (and parents) to find reliable, engaging educational resources for the children in their care. In addition to working on the site, Caroline enjoys spending her time organizing events at her church, cycling, and of course, hanging out with her husband and two kids.)