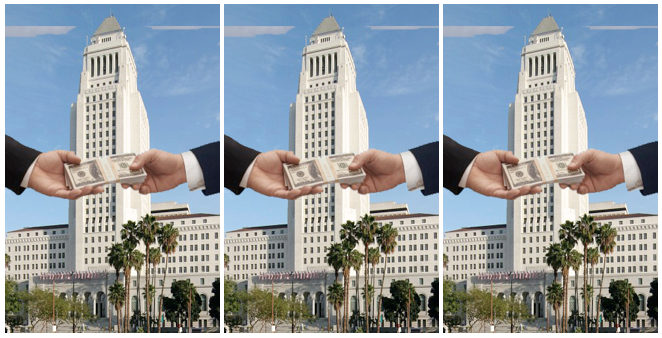 CITYWATCH INSIDER REPORT (FIRST OF AN OCCASSIONAL SERIES)--If you ask someone what the small army of lobbyists who frequent LA City Hall actually do, you'll probably get an answer along the lines of, “they try to get the City Council and various commissions and committees to support projects and other things their clients want.”

This is true. But it leaves a lot to the imagination. For instance, when a lobbyist steps off the elevator on one of the floors at City Hall, where is he or she going? To the mayor's office? To one of the 15 LA City Councilmembers' offices? To the Planning Department? Public Works?

And even more to the point, who is the lobbyist going to talk to in one of those offices, and what, exactly, will that city official be asked to do?

Because lobbying firms are required to register with the City Ethics Commission and file quarterly reports that are posted on the commission's website, one might assume that the answers to these questions are just a few mouse clicks away. Unfortunately, that's not the case.

To illustrate, take the most recent quarterly report of one of five firms registered to lobby on behalf of Clear Channel Outdoor, the multinational corporation that owns some 1,600 billboards in the city. The firm, Ek & Sunkin, reported receiving $75,000 from the corporation to lobby on “issues related to City sign ordinance.” Listed as targets of that lobbying were the mayor's office, the city council offices and the city planning department. That's the extent of the report.

There are more than a thousand persons working in the mayor's office, the city council offices and the planning department. Who did the lobbyist meet with? The mayor himself or an underling? A city councilmember or one of his or her staff? The director of planning or a deputy?

And almost every conceivable issue involving billboards would be related in some way to the city sign ordinance. Did the lobbyist want an amendment to the ordinance? A particular vote on the latest version of the ordinance which is pending in City Council committee? Something else?

Some reports are marginally more informative. For example, when the lobbyist is working for a client with a specific real estate development, the name or address of the project is often listed. But there is typically no detail about who the lobbyist met with, when and where the meeting took place, and what, exactly, was being sought. All these questions are highly pertinent to one of the Ethics Commission's stated purposes: promoting government decisions that are “fair, transparent, and accountable.”

We'd all like to think that politicians and other city officials are guided in their decisions purely by personal principles and public opinion. But one needn't be a cynic to assume that those officials are also influenced by the blandishments of businesses, labor unions, and others with a strong vested interest in the decisions made inside City Hall.

Consider the fact that 200 firms employing 442 lobbyists are currently registered with the Ethics Commission, and that those firms were paid $58 million last year to promote the interest of some 1400 clients ranging from corporate behemoths like Exxon Mobil and Comcast to local businesses such as restaurants and taxi companies.

In addition, those lobbying firms reported raising $996,000 for city election candidates and delivering another $324,000 in contributions from individuals. All legal, even though registered lobbyists are prohibited by law from contributing directly to those candidates.

It's doubtful that this flood of money spent to influence city officials can be slowed down, but there are ways to shine more light on the connections between that money and the decisions those officials make. In fact, the Ethics Commission is engaged right now in a review of the municipal lobbying ordinance, and soliciting public comment about ways to improve it.

The commission doesn't have to look far for ideas. In San Francisco, for example, lobbyists are required to report the names of officials they contact, the date and location of that contact, and its purpose—to propose a specific policy, to get support for an ordinance, to provide information about some matter, and so forth.

That city also maintains a directory of all public officials who have been contacted by a registered lobbyist and a list of all “subject areas” of concern reported by lobbyists. Lobbying firms are also required to report monthly, rather than quarterly as in Los Angeles.

At its most recent meeting, the Ethics Commission discussed another element of lobbyist regulation that seems to cry out for reform. While the state of California and Los Angeles County define a lobbyist as someone who receives compensation for communicating with a public official to influence legislation, Los Angeles defines a lobbyist as a person who engages in 30 hours or more of compensated lobbying in a 3-month period.

Which means that a lobbyist spending less than 30 hours in that activity is not required to report, or even register with the Ethics Commission. How many contacts could a person make to influence city officials within that time limit and still keep the public in the dark?

Of course, none of these possible reforms would impede deep-pocketed interests from sending that small army of lobbyists to City Hall to buttonhole councilmembers, commissioners and others. But at least the public would have a better idea of who was buttonholed and how that contact might have affected a vote or other action.

To use another billboard-related example, did lobbyists for Clear Channel meet with Councilman Mitchell Englander and/or members of his staff before he put forth a proposal to grant “amnesty” to all of the unpermitted and out-of-compliance billboards in the city? The public surely deserves an answer to the question.

If you want to weigh in on lobbying reform, the commission welcomes public comment. Send yours to

ethics.policy@lacity.org. We can be sure that the lobbyists themselves will look to protect their own interests. But that may not jibe with the greater transparency and accountability the public deserves.

(Dennis Hathaway is the president of the Ban Billboard Blight Coalition and a CityWatch contributor. He can be reached at: Dennis@banbillboardblight.org.) Edited for CityWatch by Linda Abrams.