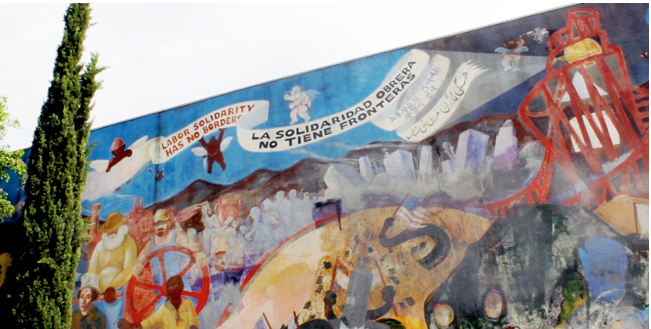 LATINO PERSPECTIVE--This is a very interesting KCET viewer supported story in which they aimed to find out which way is South LA heading? As Latinos have become a numerical majority in what was recently an African American neighborhood, do we see tensions, collaborations or segregation?

They argued that in the 1980s, thousands of Mexican and Central American immigrants began setting down roots in South LA. Some had just crossed the U.S.-Mexico border, fleeing Civil Wars and economic devastation, and others moved here after living in crowded neighborhoods near downtown and MacArthur Park; but they all came looking for the same thing: a better life.

These were tough times in South LA. During the 1980s, South LA was reeling from the aftermath of deindustrialization, with gang wars, a crack epidemic, and impoverished neighborhoods featuring more liquor stores than grocery markets.

One of their respondents drew a mixed portrait of neighborhood life when asked to recall what it was like in the late 1980s. “Mira, hay cosas que eran buenas…Look, there were things that were good, and bad things. At that time we were about the only Latinos on the block … Everyone else was Moreno (Black). But the majority of those who lived there were older people, and they were very nice. We never had any problems with any Black neighbors.”

Many of these first generation Latina/o arrivals found a kind of next door neighbor civility (even if relations stayed somewhat superficial) with their older African-American neighbors, but on the streets they often encountered hostility from youth gangs, street crime, over-policing, and a climate of violence and racialized resentment that was very particular to the 80’s and early 90’s in South LA. Pushed inward also by the language barrier, the work of daily survival, and the street violence, most Latina/o newcomers responded by “shutting in and shutting out,” basically keeping to themselves.

However, their interviews also highlighted another important aspect of South LA racial dynamics: Generations think about race in different ways. While the first generation migrated to South LA with anti-black racist ideologies—which were often hardened in the tough street climate in the 1980s and 1990s—the second generation Latinos who were raised in South Los Angeles related starkly different racial experiences with African Americans. While some had faced racially motivated tensions in the schools or the street, a large majority of the second generation expressed an affinity for African Americans that was almost non-existent among their parents’ generation.

What to make of these generational racial differences? When thinking about the future of South LA—particularly the face of leadership—we are left with the almost inescapable reality that the face of future South LA leadership will be a cohort of young leaders who will have grown up in a community that was predominantly Latino but with a strong inclination towards the African-American political and cultural legacy of South LA. These will be leaders who will have been impacted by Cesar Chavez and Dolores Huerta as much as they will have been impacted by Martin Luther King, Jr.

Learn more about the “Roots|Raíces: Latino Engagement, Place Identities, and Shared Futures in South Los Angeles” researched by the Center for the Study of Immigrant Integration (CSII) at USC at http://bit.ly/rootsraices.

(Fred Mariscal came to Los Angeles from Mexico City in 1992 to study at the University of Southern California and has been in LA ever since. He is a community leader who serves as Vice Chair of the Los Angeles Neighborhood Council Coalition and sits on the board of the Greater Wilshire Neighborhood Council representing Larchmont Village. He was a candidate for Los Angeles City Council in District 4. Fred writes Latino Perspective for CityWatch and can be reached at: fred.gwnc@gmail.com.)