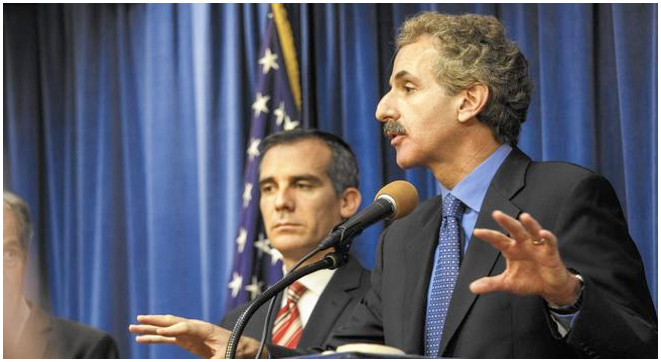 An e-mail exchange between LA Animal Services GM Brenda Barnette and Maggie Neilson, former Animal Services Commissioner and CEO of Global Philanthropy Group, and the Mayor’s Office --provided AFTER my CityWatch article, “CA Feuer, Mayor Garcetti, Councilman Koretz Ignoring Public Records Requests - Is There Something to Hide?” – reveals that wasn’t the only charitable fund the Mayor planned to launch in 2014. (Photo above: Mayor Garcetti with City Attorney Mike Feuer.)

While Garcetti’s then-Deputy Doane Liu was setting up a preliminary meeting with Neilson regarding a proposed non-profit foundation to support LA Animal Services, he was abruptly informed that Mayor Garcetti -- who has historically shown only a politically correct interest in animals -- would meet personally with Ms. Neilson.

Here’s how the usual formalities were bypassed:

“FYI us [sic] met with the Mayor yesterday. Would like to arrange for you to meet him for personal introduction. He wants an opportunity to speak publicly for the animals and would love it to be the Foundation launch this fall.”

“Hi Brenda! First I hope your summer is going well. Give my best to Pam and let’s get together in Sept…?  I‘ve been meaning to reach out for a few months now to apologize for the slowdown in progress on this…we are poised to begin again in full in Sept. I would love to connect with the mayor; just let me know when works for him and we will make it happen. This is going to be awesome despite the brief delay.  Xo, m”

This affectionate exchange portrays an uncomfortably informal relationship between the GM and the sole incorporator of a proposed charitable arm for LA Animal Services. Trevor Neilson and Maggie Neilson of Global Philanthropy Group reportedly advise such celebrities as Madonna, Brad Pitt and Angelina Jolie in how to spend charitable dollars to maintain a humanitarian profile. Brenda Barnette claims to have been a “former fundraiser” (and later used that influence to have restrictive items in the MOU removed by Deputy City Attorney Dov Lesel). Shouldn’t a formal letter, or at least an professional business e-mail, have been used in arranging a meeting with the Mayor of Los Angeles?

According to the CA Secretary of State, Maggie Neilson had filed as sole incorporator for “The Los Angeles Animal Rescue Foundation” on August 11, 2014.

Following is some of the history garnered from 540 pages of e-mails provided by the City Attorney’s office, plus the delayed responses from the Mayor’s Office and GM Brenda Barnette to my CPRA requests, which indicate that Brenda Barnette was intending to be very closely involved.

On Apr. 22, 2014, Maggie Neilson wrote to her pro bono attorney, who was developing the MOU for “The Animal Rescue Foundation, “The first issue is that we want to confirm Brenda’s ability to serve on the Foundation’s Board.”

“With permission of the Mayor would it be permitted for me to serve as a volunteer Board member?”

The MOU later approved by the Garcetti-appointed Animal Services Commission, showed that annual financial statements of “The Los Angeles Animal Rescue Foundation” would be provided only to the LAAS General Manager, the Department’s senior accountant and the Commission.

Maggie Neilson’s last-shown contact in the Mayor’s office, according to e-mails provided, was Diedre Lind, President of the Mayor’s fund.

Doug White, director of  Columbia University's graduate program in fundraising management, advised the L A Times that, “Information about a nonprofit shouldn't be channeled through a politician's office . . . Because of the nonprofit's association with government, its officers and directors should be particularly attentive to maintaining independence.”

An attorney for a major governmental agency explained, “When a governmental agency, such as LA Animal Services, joins with an allied non-profit to raise funds, they then have an unaccountable partner that is not subject to the scrutiny of CA Public Records Act requests. That organization then is branded by, and has the benefit of, the department’s name, trademark and good will for soliciting donations without objective requirements or accountability.”

A CITY CHARITY BY ANY OTHER NAME

Neilson’s foundation does not contain the name “LA Animal Services” in its title as the other city department foundations do, nor is its corporate mission statement even similar.

The Articles of Incorporation state, “The specific purpose of the Corporation is to ensure every animal has a home and that no adoptable animals are euthanized in Los Angeles.”

However, the Department of Animal Services, which is a tax-funded public safety department, has a posted mission statement and mandate: “To promote and protect the health, safety and welfare of animals and people.”

How do we correlate this and the MOU which states, “… the specific purpose of the Foundation is to raise funds to support the mission of the Department…” when seminal factors are vastly dissimilar?

There are fundamental legal and functional differences between a public, tax-funded animal control agency such as LA Animal Services -- which is mandated to pick up and impound stray/sick animals, maintain open-entry shelters, and enforce laws to protect animals and people -- and a private, donation-based “rescue,” which offers homeless animals for adoption after owners relinquish them or fail to claim them from the shelter.

Would donors seeking to support the idealistic goals of “The Los Angeles Rescue Foundation” feel deceived that their money were to be spent on the public-safety obligations of a city animal-control agency, including humane euthanasia when necessary? Or is money assumed to be donated for the shelter allowed to be distributed otherwise? Is it reserved to help shelter animals? Not according to the changes made by the City Attorney in the standard template that is used by other City fundraising arms.

Other questions are:  Will “The Los Angeles Animal Rescue Foundation” usurp the fundraising efforts of independent local rescue and animal-welfare groups in Los Angeles? And, why are City officials ignoring the fact that the LA Animal Services already has a robust, generously donor-funded and closely monitored, Animal Welfare Trust Fund?

DEVIATIONS FROM OTHER CITY-DEPARTMENT FOUNDATIONS

“Animal Services was advised to look at that contract as a model for using with a foundation to do fundraising for that department.”

In a January 9, 2015 e-mail to Dov Lesel, Brenda Barnette describes herself as a “former fundraiser” and agrees with The Los Angeles Animal Rescue Foundation’s pro bono attorney that the standard 20% overhead limitation applied to other departmental foundations is unnecessary, because “…the marketing to elevate the Department for community members will be expensive and worthwhile.”

“Thanks Dov – I do want to clarify that we are not raising funds “for” the city in the sense that the $ we raise won’t go through the city system. This will be an independent non-profit organization that will work side by side with the Department towards the same mission.”

“Will you be engaging in a discussion with the Dept. re its needs and agreeing to fund certain projects during the year or funding projects that you think the Dept. needs?”

(Note: Any answer by Neilson to these questions was omitted from the CPRA response.)

On Oct. 06, 2015, in compliance with the Foundation’s request, Dov Lesel also agreed to remove “financial” from the support to be provided to the Department and remove any support for the Department’s “needs” — only its “mission and function.”

According to e-mails, it wasn’t until January 13, 2016, (after Commission approval and before the Council’s PAW Committee meeting) that Dov Lesel finally read the Articles of Incorporation for “The Los Angeles Animal Rescue Foundation.”

On that date he sent an e-mail to Global Philanthropy Group, cc’d to Brenda Barnette, stating:

“I noticed that there is no mention that the purpose of the organization is to support the Department.”

“The articles of incorporation describe the mission of the Foundation as working to ensure every animal in Los Angeles has a home and that no adoptable animals are euthanized.  This mission supports the goals of the Department.  The purpose of the MOU is to establish the official relationship between the two entities.”

Lesel (finally realizing what he had been working on for two years) replied:

“[M]y concern is that this issue may be raised by City staff as it goes through the approval process, as these articles are very different than the ‘normal’ articles of incorporation for City partner fundraising organization. [sic] Normally, this type of non-profit incorporates specifically to assist the City.

“Dov, Two years later and much back and forth and NOW we have a big question after the Commission has approved.  I will appreciate your good efforts to get ma [sic] a document I can transmit without further delay.”

“I can check with the CLA’s office in advance to see if this would be a concern.”

Apparently the fact that “The Los Angeles Animal Rescue Foundation” articles are notably “very different” from other City-department fundraising partners and failed to include that it is intended “specifically to assist the City” did not bother the CLA either, because it traveled on to the Personnel and Animal Welfare Committee with no changes or “red flags.”

With the excuse that his one-hour Personnel and Animal Welfare Committee on March 13, 2016, ran out of time, the LAAS charity item, CF16-0070, was continued.  On April 4, my CityWatch article was published. No further action has been taken yet.

HOW IS MAGGIE NEILSON CONNECTED TO LA ANIMAL SERVICES?

On March 5, 2013, word spread through the Los Angeles humane community and far beyond City Hall that Kathleen Riordan, daughter of former Mayor Richard Riordan and popular 14-year veteran Animal Services Commissioner, was being replaced by Maggie Ragland Neilson, an unknown in animal circles.

Neilson admitted that she had no animal experience except being a dog owner. Her background also failed to reveal any professional interest in animal welfare or experience in city government.

Riordan’s analytical mind and penchant for asking probing questions had often set her at odds with then-Mayor Villaraigosa’s aide Jim Bickhart. And, at one meeting, Riordan’s insistence that the City’s mandatory competitive-bidding practices were not being followed caused GM Barnette to bang her head down on the Commission table and later stomp out of the meeting when the Commission agreed with Riordan.

According to an interview with Kathy Riordan by Dana Bartholomew of the Los Angeles Daily News, Jim Bickhart informed her by telephone late on February 28 that she was being replaced by someone with “more to contribute...”

Maggie Neilson served less than four months and was not reappointed by Mayor Garcetti, but wrote to Brenda Barnette that not being a Commissioner would allow her to work on forming a foundation to do fundraising for LAAS.