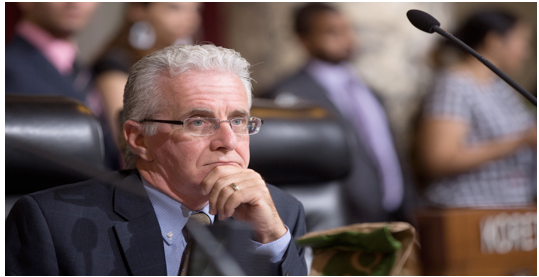 The Mayor of Los Angeles will release the City’s proposed FY 2016-17 budget on April 20. Thanks to a handful of San Rafael teens in 1971, 4/20 normally denotes a celebration of marijuana (Photo right). In LA, Charter Section Article III, Section 312 requires the Mayor to propose a balanced budget “on or before April 20.” It’s the law! (Photo above: Councilman Paul Krekorian chairs the City Council Budget Committee.)

Jon Regardie well characterized the fete at City Hall in last year’s budget edition of the Downtown News:  “For political geeks, budget season is a medium-level holiday. It’s not forgettable like Arbor Day or Gov. Scott Walker Day (not actually a holiday…yet,) but then again, it’s not quite the Christmas/Hanukkah equivalent of Election Day, either. Think of Budget Season as a political Columbus Day, minus the brutalizing of Native Americans.”

Budgeting is the highest refinement of program development.

LA’s Neighborhood Councils get this. That’s why the educated, researched budgetary recommendations of the Budget Advocates should be studied in detail by the Mayor and City Council.

Los Angeles workers also get it. This year the Mayor’s budget can rely on a long-term partnership with city employees that is locked into a stable contract that backloads modest raises, resolves thorny legal challenges, and, according to Cheryl Parisi, Chair of the Coalition of Los Angeles City Workers at the announcement of the deal, “addresses the concerns of city workers and our communities.” The City does best when it engages and empowers its workers as well as its customers.

It’s time to rebuild the City’s workforce to provide basic city services. The new labor agreement positions the City to do just that: recruit and train local Angelenos, reduce costly and inefficient reliance on private contractors, and hire, hire, hire!

I get nostalgic about budget season. There were years when budget and political staff promulgated clever and entertaining lists; some years there was chocolate. It was always grueling and important. Sometimes it was fun.

The City always predicted deficit at the start of budget preparations. To its credit and to the frustration of many, the CAO notoriously, historically, and institutionally has budgeted conservatively, overestimating expenses and underestimating revenue. In 2007 the deficit shrunk from an anticipated $155 million to $20 million by budget time. In 2008 the gap started at $406 million; in 2010 the worst of the financial crisis gave the sky-is-falling number crunchers opportunity to predict a $530 million shortfall. The 2014-15 budget schism started at $242 million; in 2015 the opening estimate was a mere $165 million.

What can we expect from this year’s budget proposal?

Funny thing about the city budget. The CAO’s budget team has been working on predictions and proposals since last November but when the budget comes out, it becomes the Mayor’s budget and the role of the CAO shifts to that of “budget advocate” for the City Council’s Budget and Finance Committee.

Approximately 74% of the City’s budget is earmarked for public safety. Last year’s budget allowed for the hiring of 270 new firefighters. No budget has ever required the LAPD to meet levels of efficiency and cost-effectiveness realized by every other city department.

City Controller Ron Galperin reports an upcoming audit on police civilianization. Many in the police department maintain the expensive opinion that every job done for the police force could and should be done by a uniformed officer. For years, competent jailers have been supervised by a shadow sworn organization. Right now, police department representatives are lobbying to set up their own personnel operation. Left to their own devices, the LAPD would assign police officers to repair vehicles (‘though mechanics are treated ever-so-slightly better than other police civilians!)

Hundreds of millions of precious municipal fiscal resources could be saved by the prudent, smart deployment of civilians.

Last year the adopted budget of the City’s non-proprietary departments ultimately totaled $8.6 billion. Me? I’ve never understood why the overall number fails to include the budgets of the proprietaries: the airport, the harbor, and the DWP. Add another, what, $13 billion for a more comprehensive picture?

Hopefully this year’s budget will advance significant investment in the City’s infrastructure. By legal agreement, there’ll be funding for sidewalk repair – another great opportunity to recruit and train the next generation of LA workers. Every time a big wind hits, I think of the tree workers who respond to emergencies as their low-wage private sector counterparts rush to get out of the rain. Perhaps a member of the budget committee will ask how many city departments do the tree trimming and how much each tree costs to be trimmed?

How much will the City invest in solving homelessness? Is there a cost to the City for the best applause line in the Mayor’s State-of-the-City address -- that graduates of LAUSD would attend an LA community college tuition-free for one year? Will the $4.7 million the Mayor announced for updating community plans placate advocates for a harsh moratorium on bad development?

The budget is public once it’s released and LA’s electeds have made good effort towards increased transparency. Here’s some good resources for budget season:

For the past several years, at the initial advocacy of beloved recently passed Councilmember Bill Rosendahl, the unions representing city workers have presented their budget proposals and analyses from the center table.

“There is not a more important and fundamental principle in legislation, than that the ways and means ought always to face the public engagements; that our appropriations should ever go hand in hand with our promises. To say that the United States should be answerable for twenty-five millions of dollars without knowing whether the ways and means can be provided, and without knowing whether those who are to succeed us will think with us on the subject, would be rash and unjustifiable. Sir, in my opinion, it would be hazarding the public faith in a manner contrary to every idea of prudence.”

At the conclusion of the hearings, the committee adopts recommendations to send to the full City Council for debate and approval. Traditionally the difference between the Mayor’s proposed budget and the budget adopted by the Council varies by less than 7% -- but it’s so much fun to watch! Ah, sweet memories! I recall the years I waited to see what Hillary N. was wearing! Oh, and watch the CLA – that’s where the magic happens!

The Mayor has solid veto authority and the budget is his (or hers). An adopted, balanced budget must be voted on and be in place by June 1. It is, always.

City Hall insiders tell CityWatch there will be a DWP “reform” measure on the ballot in November 2016 because Mayor Eric Garcetti and Council President Herb Wesson want to add reforming the DWP to their lists of accomplishments in upcoming re-election bids. No news there!

For fun and full transparency, read:

(Julie Butcher writes for CityWatch, is a retired union leader and is now enjoying Riverside and her first grandchild. She can be reached at juliejbutcher@gmail.com) Photo credit: Marijuana plant-Julie Butcher. Edited for CityWatch by Linda Abrams.