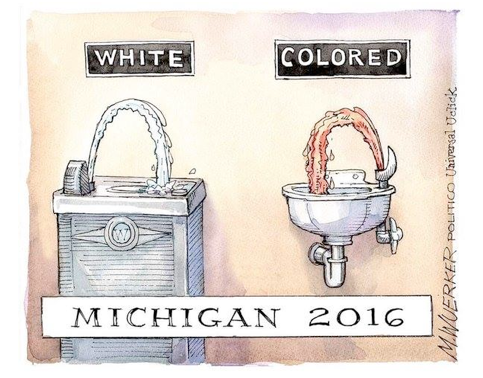 EDUCATION POLITICS-The annual commemoration of the life of Dr. Martin Luther King -- a national holiday that most employers except the government ignore – is marred by a glaring disconnect between the rhetorical “feel-good” civil rights dream of Dr. King and the stark underachieving reality of Black America. This is accentuated when juxtaposed with the incessant illegal behavior of local, state, and federal legal authorities who do little to address the injustice imposed on Black communities.

Some injustices are a result of civil negligence, resulting from an unintentional act or omission when there is a duty to act. Worse, however, is criminal negligence that results when there is a clear and unambiguous illegal action such as what happened in Flint, Michigan with the city's water supply. This happened because of a reckless disregard of an easily ascertainable truth, namely, when the city connected the Flint municipal water supply to the known polluted Flint River, something that amounts to assault, battery, and probably worse criminal acts. Until those responsible for this see the inside of a prison cell, these actions to save money will continue unabated, no matter how many people of color have their lives destroyed in the process.

It doesn’t matter whether we are talking about the execution-style killing of a non-threatening criminal subject caught on police video in Chicago (and covered up for over a year by public officials including Chicago Mayor Rahm Emmanuel, who was more concerned with his re-election than seeing that justice was done,) or Michigan Governor Rick Snyder’s appointment of Emergency Manager Kevyn D. Orr, who, while charged with saving Flint, a city in fiscal despair, wound up poisoning it with a polluted water source not fit for human consumption. These cases and myriad of others like it will never result in long prison terms for such criminal behavior.

What adds insult to injury is that the American ruling class is never held accountable for its crimes. An additional affront is the fact that our corporate-dominated government will have to pick up the cost of this ever increasing criminal behavior – behavior that those guilty of these crimes should be forced to pay for both monetarily and criminally.

Building a Belmont High School on an irremediable toxic waste dump is soon forgotten as long as innocent predominantly Latino children are the ones who go to school on the site. And O'Melveny and Myers are not held accountable for their conflict of interest in representing both LAUSD and the developer of this public works project designed to screw the public. Yes, fundamental to all of these public scandals are the conflicts of interest – cases where the career and financial well-being of a few powerful people is systematically placed over the needs of the public. The only fiduciary duty these government leaders seem to have is to themselves, their corporate cronies – and never the public. But has it always been this way?

And of course, the granddaddy of these kinds of illegal and dangerous schemes, in terms of their sheer magnitude, remains the credit default swaps and sub-prime scams. The corporate criminalsin those cases not only got the government to bail them out; they got them to pay their bonuses.

(Leonard Isenberg is a Los Angeles observer and a contributor to CityWatch. He was a second generation teacher at LAUSD and blogs at perdaily.com. Leonard can be reached at Lenny@perdaily.com) Edited for CityWatch by Linda Abrams.