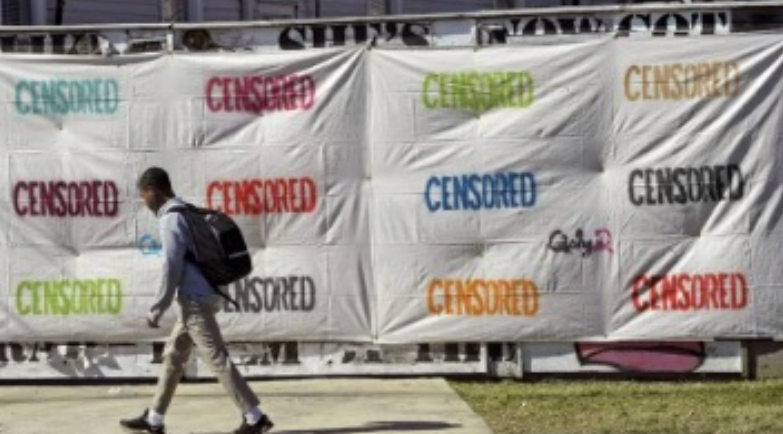 INTEL REPORT--Marking the unholy first time "an American president's public pronouncements have been deemed too scabrous for repetition," a federal judge ruled this week that New Orleans officials violated an artist's freedom of speech when they tried to censor a mural quoting Trump's infamous "Access Hollywood" pussy profanities.

The mural was created in November 2017 after warehouse owner and real estate developer Neal Morris gave permission to street artist Cashy D to paint it on a Morris property on South Liberty Street.

The mural is in fact less offensive than the foul-mouthed fuehrer's own words: Starting with, "I moved on her like a bitch," it replaces "bitch," "tits" and "pussy" with cartoon-like pictograms. "I thought it was a great idea,” Morris said. “I think what the president said is horrendous and awful...and anything that helps an artist resist, I am in favor of.”

Others disagreed. A neighbor complained about pictures of breasts "where the school bus comes by" - no word on what she thinks of a president who publicly leers about them - and city officials slapped a fine and ban on Morris, citing labyrinthian, possibly non-existent regulations overseen by a murky cabal of review boards and planning commissions.

The ACLU sued the city, calling its rules “a multi-pronged assault on the First and 14th Amendments” by requiring artists to "obtain government approval before engaging in their constitutionally protected freedom of expression.”

Judge Martin Feldman concurred, deeming the rules illegally "indistinct, shapeless and obscure" and declaring "the loss of First Amendment freedoms constitutes irreparable injury," a ruling the ACLU called "a victory (for) artistic expression." Morris was already ahead of them: To protest the city's "dumpster fire of a process" to decide what is and isn't art, he'd established a renegade Mural Project boasting exuberant acts of civil disobedience, aka street art, all around the city. "All you have to do to enjoy it," he says, "is to look up.”