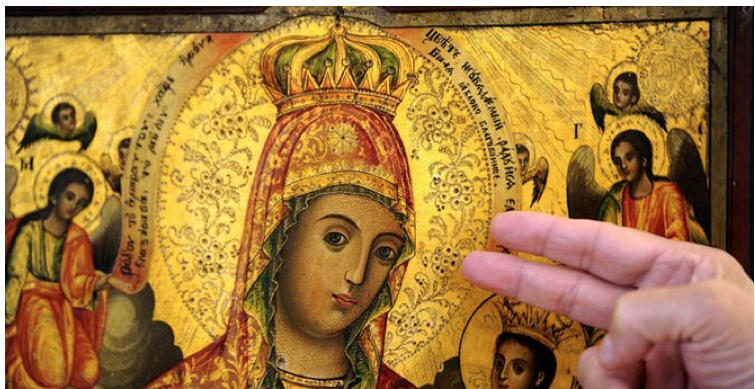 PERSPECTIVE--Intrigued by the controversy that erupted over Secretary of State Mike Pompeo’s speech before the American Association of Christian Counselors last week in Nashville — it was titled “Being a Christian Leader” and was eventually removed from the State Department website — I wound up reading the whole speech. And I actually found one paragraph that I liked.

I’ll get to that in a moment, but first, ta tum, the controversy:

Yes, yes, we need separation of church and state, and Pompeo’s headline-declaration of faith no doubt violated political propriety, but the real issue here is a little too gooey to be contained by political correctness. You know: Religion must stay over there in that corner while government goes about its business — wages war, maintains a nuclear arsenal, entertains the American public with air and water shows — free of all unelected interference . . . except, uh, financial interference, which is always appropriate and always welcome.

In other words, separation of church and state is small potatoes and hardly comes close to addressing the real issues of the day. Church and state, not to mention corporate wealth, are far too full of themselves and they all need to be contained by values that are immune to the corruption of power.

Do such values even exist? And if they do, what if they’re over there in the religious corner of America? Are they banned from the political realm? How can we make sure that “separation of church and state” doesn’t mean separation of values and state?

Or maybe I should put it a little more desperately: Where are the values — religious or otherwise — that can save this recklessly careening, war-addicted, carbon-spewing state from participating both in its own and the whole planet’s destruction?

Here’s where I felt the speech turn dangerous and start oozing collusion of church and state — the very thing the nation’s founders were allegedly worried about. To be an “imperfect servant of a perfect God” implies that one has a relationship with perfection: indeed, that one takes orders from a perfect being. Considering that Pompeo is widely known as both a war hawk — a proponent of war with Iran — and an ally of blatant Islamophobes, his declaration of service to a perfect God is definitely troubling. It’s one step away from claiming divine justification for persecution of a given enemy.

Just ask Constantine, the Roman emperor who began the modern-day collusion process some 1800 years ago, when he linked Rome with the theretofore persecuted Christians. 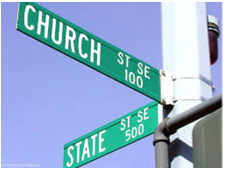 While this stopped the persecution, it also had a cost: “. . . the Church became very powerful very quickly,” Richard Leonard wrote at America: the Jesuit Review. He called it the rise of Imperial Christianity. “Up to this time the image of Jesus as the Good Shepherd was the most represented. After 313, however, Jesus is dressed in royal robes, with a crown, scepter, and orb.”

And: “Tragically, for the next few hundred years, conversions were demanded at the end of a sword. No religious dissent or pluralism was tolerated.”

Fast-forward a few centuries — through the Crusades, the Inquisition, slavery, ongoing genocide of “the primitives,” the War to End All Wars, the war that followed it (with 70 or 80 million fatalities), the development of nuclear weapons, etc., etc., most of which were examples of church-state collusion — and here’s Gen. William Boykin, undersecretary of defense for intelligence under President George W. Bush, famously reminding the world that collusion of church and state is alive and well, when he credited his success against a Somali warlord thus: “I knew my God was bigger than his. I knew that my God was a real God and his was an idol.”

And then there are the Blue Angels, the Navy’s flying recruitment ad that spends $35 million a year and consumes multi-thousands of gallons of fuel putting on dozens of garish airshows throughout the country every year, thrilling audiences and, as Christopher Cook points out, garnering endless plaudits from the uncritical media.

“These media celebrations of military displays are widespread,” Cook writes, “and portray tools of war as benign, ‘cool’ machines — although they are designed to kill people.”

Note the name: the Blue Angels. Aren’t angels immortal, heavenly beings that bless the good, right-believing people of the world? How much fossil fuel do angels consume? How many bombs do they carry? How do they feel about helping the military maintain a public relations façade of glory in front of the brutal reality of war?

But back to Secretary Pompeo for just a moment. As much as I felt that the anger over the official posting of his “Being a Christian Leader” speech was justified, there was a paragraph in the speech that held me in momentary awe. Speaking of the difficulty of the job, he quoted Abraham Lincoln:

“I have been driven many times upon my knees by the overwhelming conviction that I had nowhere else to go.”

I believe most of the planet is on its knees right now, as he climate shifts, the fires rage, people’s homes become unlivable and Constantine’s jets and drones buzz overhead, loosing their bombs on the non-believers.

(Robert Koehler, syndicated by PeaceVoice, is a Chicago award-winning journalist and editor.)