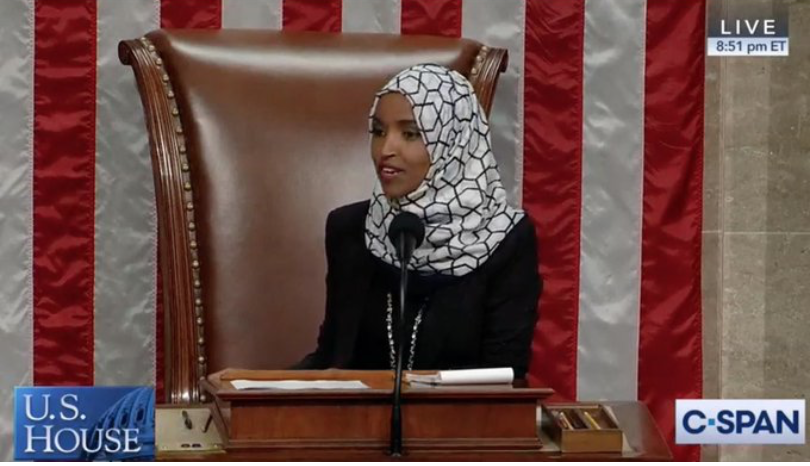 RACE WAR--A racist chant against Rep. Ilhan Omar by backers of President Donald Trump during a rally in North Carolina Wednesday night was countered by an outpouring of solidarity with the Minnesota congresswoman as progressive activists, members of Congress, and ordinary Americans vowed to continue defending Omar against the right's bigoted and dangerous attacks.

As Trump supporters chanted "Send her back!"—echoing the sentiment of the president's recent attacks against Omar and three other progressive lawmakers—the progressive community responded with expressions of support for the congresswoman, sending the hashtag #IStandWithIlhan to the top of Twitter's trending list in the United States.

"#IStandWithIlhan and am proud to work with her in Congress," tweeted Sen. Bernie Sanders (I-Vt.), a 2020 Democratic presidential candidate. "Trump is stoking the most despicable and disturbing currents in our society. And that very hatred and racism fuels him. We must fight together to defeat the most dangerous president in the history of our country."

After the president mentioned Omar, a Somali refugee who Trump has baselessly smeared as an anti-Semite and al-Qaeda sympathizer, the North Carolina crowd erupted in boos and chanted, "Send her back!"

The chant was seen as an appalling preview of what's to come as Trump doubles, triples, and quadruples down on his racist rhetoric heading into his reelection campaign.

"That Trump's fans are fully on board with his racism isn't surprising—polling conducted following Trump's latest racist attacks indicated his approval rating among Republicans rose after he made them," wrote Vox's Aaron Rupar. "But the moment is an indication of how ugly the 2020 campaign might get, especially amid reports Trump views making racist attacks on Democratic women of color as a way to drive up turnout among white grievance voters, and thus as a key part of his reelection strategy."

As news and videos of the chant spread across social media, progressives on Twitter stood with Omar against Trump and his supporters.

"Trump attacks her cause he's racist but also because she is very, very good at her job. And this is also why the Dem leadership won't stand up for her. She puts them to shame," tweeted writer Sarah Jaffe. "We've got impressive new members of Congress, but none have been more impressive than Omar in the face of an endless stream of hate and suspicion."

Omar herself took to Twitter late Wednesday to respond to the Trump rally.

"I am where I belong, at the people's House," wrote the Minnesota congresswoman, "and you're just gonna have to deal!"

(Jake Johnson reports for Common Dreams … where this report was first posted.)