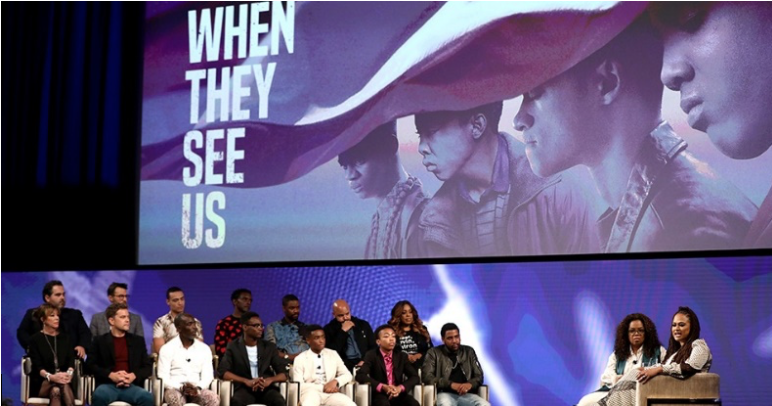 WHEN THEY SEE US: Not long ago, a few southern newspapers offered apologies for having vociferously opposed the civil rights movement.

The newspapers that were around in the 1910s and 1920s offered mea culpas for condoning lynching, Klan terrorism and the routine indignities of Jim Crow. (Photo above: The cast onstage with Oprah Winfrey and Ava DuVernay at the Netflix "When They See Us" FYSEE Event at Raleigh Studios on June 09, 2019 in Los Angeles, California. (Getty Images)

Much of this public soul-searching was prompted by staff journalists rummaging through archives looking for information about their region’s sordid past. It wasn’t difficult to find evidence of their own newspapers’ conveniently forgotten complicity with evil.

As it turns out, the rich and powerful media barons who owned newspapers during that era usually aligned themselves with the most reactionary forces, including lynch mobs.

Even so, a few newspapers have correctly figured out that they’ll never have moral credibility with readers without dealing forthrightly with their racist pasts. The sting of contrition was mediated by the fact that apologizing for editorials written in the 1920s felt like an exercise in abstraction.

Still, it’s great to know that there’s no statute of limitations when it comes to the press admitting its errors. That said, apologies shouldn’t have to wait decades. They should be as common as rain because mistakes are made on every media platform every day.

Just as most newspapers publish daily correction boxes where the previous day’s errors are listed, it would help the credibility of this industry enormously to regularly revisit our biggest failures and admit where groupthink has had disastrous results — from cheerleading the Iraq war to giving Donald Trump a billion dollars in free campaign coverage because he long was regarded as an entertaining freak show and not a serious candidate.

I’ve been thinking about this notion a lot since recently finishing director Ava DuVernay’s excellent four-part Central-Park-jogger miniseries “When They See Us” on Netflix. Her devastating portrayal of the New York cops and district attorney’s office coercing confessions from five underage black and Latino boys regarding the brutal sexual assault of a jogger in Central Park already has resulted in rough karmic justice for many of the players in the drama.

Linda Fairstein, the woman who ran the sex-crimes unit that had jurisdiction over the case, has been kicked off several prestigious boards and dropped by the publisher of her pulpy crime novels. Even though the five men who spent as much as 14 years in prison have been exonerated by the confession of the perpetrator and a lack of DNA or other physical evidence putting them on the scene, Ms. Fairstein continues to maintain that they were part of the assault of Trisha Meili, who is from Upper St. Clair.

Prosecutor Elizabeth Lederer was removed from her teaching position at Columbia Law School recently after students demanded her ouster for her role in railroading the young men. In the miniseries, she’s portrayed as a feckless second banana to Ms. Fairstein.

I can’t wait to see what eventually happens to commentator and former Washington Post columnist Pat Buchanan for publishing this kind of racist doggerel about the accused: “How does a civilized, self-confident people deal with enemies who gang rape their women? Armies stand them up against a wall and shoot them; or we hang them.”

Mr. Buchanan also wrote that if “the eldest of that wolf pack [who was 16] were tried, convicted and hanged in Central Park, by June 1, and the 13-and 14-year-olds were stripped, horsewhipped, and sent to prison, the park might be safe again for women.”

Mr. Buchanan purposely used the language of antebellum slavery to remind his readers of America’s historic prerogative when it came to punishing black men and boys. Nothing could be too barbaric when the honor of white women was at stake.

The New York Times and The Washington Post, arguably America’s two finest newspapers, fell in line with racist editorials of their own. It may have been 1989, but the rhetorical logic both papers offered would have been familiar to anyone living in 1859.

Much already has been made of Donald Trump’s infamous $85,000 ad buy in four prominent New York newspapers calling for the reinstatement of the death penalty and execution of the Central Park Five.

The ad spells out his philosophy clearly in those pre-Twitter days: “BRING BACK THE DEATH PENALTY! BRING BACK OUR POLICE!” and “I want to hate these muggers and murderers. They should be forced to suffer and, when they kill, they should be executed for their crimes. …CIVIL LIBERTIES END WHEN AN ATTACK ON OUR SAFETY BEGINS.”

Mr. Trump was a nascent tyrant even in those days, but still he was endlessly profiled by an adoring press that happily glossed over his lies about his wealth and business acumen because he always made great copy.

Because this happened within recent memory, and because the men who lost their childhoods are still very much with us (and are $41 million richer thanks to an unlawful conviction settlement from New York), I believe they still are owed apologies from every media organization that called for them to be horsewhipped and executed. That would be most newspapers at the time. This should be a no-brainer, because every newspaper can pull up its morally compromised editorials as evidence.

We all know that the president is morally incapable of apologizing, but as with Ms. Fairstein and Ms. Lederer, his day is coming — and he’s going to lose something far more substantial than a book deal.

(Tony Norman is a Pittsburgh Post-Gazette columnist. He was once the Post-Gazette’s pop music/pop culture critic and appeared as an expert on cultural issues on local radio talk shows and television programs. In 1996, he began writing an award-winning general interest column, which, he says, rejuvenated his enthusiasm for the kind of journalism that makes a difference. This piece was posted earlier at Common Dreams.)