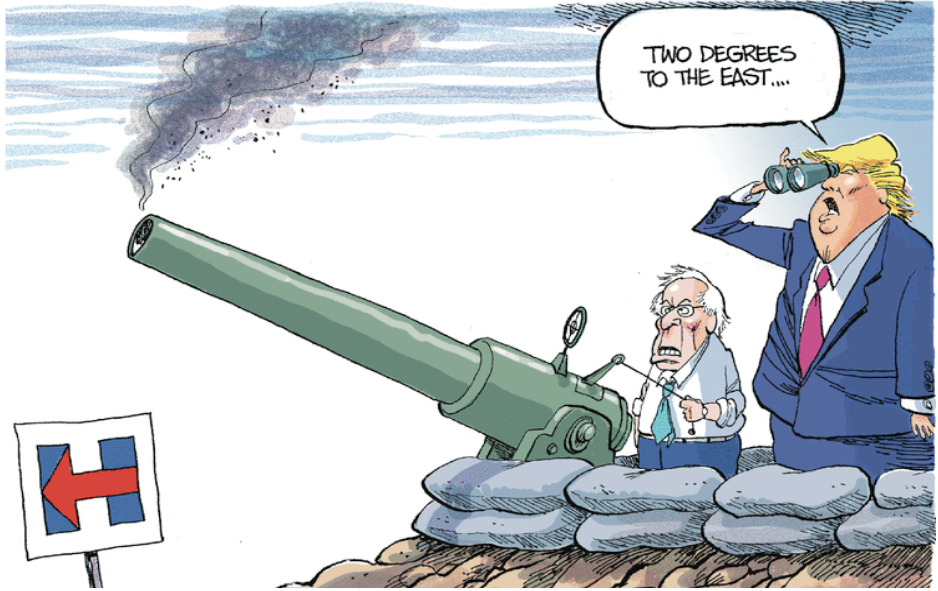 MY TURN-For all who campaigned, called, volunteered and encouraged to elect Hillary Clinton during the 2016 campaign, we knew that there was an extreme left faction that was buying into the conspiracy theories that were being dissipated.

The very same stories that were shared on the right had taken the extreme left by the nose and was leading them down the garden path of hate. The end result was that in their pursuit of “purity” some made the childish decision to not vote or even vote for Trump, without a single consideration for the people who might suffer under this regime. Instead of being accountable, the tea party left blamed the Democrats for “not having a likeable candidate.” Really? Since when is a candidate 100% likeable by all? Now that these liberals have awakened to this nightmare, they looked to Robert Mueller to save the day…and, of course, many continue to blame the DNC instead of looking in the mirror at their own elitist attitudes.

Since Bernie Sanders has once again decided to step in and try to divide the Democratic Party, we are seeing the same berniebros, bots, brats, and crats appear, spewing the same absolute bull that they did before. It’s quite apparent that they learned absolutely nothing from the previous Presidential campaign. Anyone who has seen them recognizes the same cut and paste content that they continue to spew, and again they don’t realize that a majority of the Democrats, REAL Democrats, not Bernie’s fake identity, are located in the center and a bit left of center. We did our job. We knew the consequences of electing Trump and Republican leadership. In other words, we are adults. However, as we watch the country slowly being destroyed, piece at a time, we also looked to Mueller with a glint of hope.

Mueller may have a long-term game plan, but in an era of blatantly illegal activities by Trump and his administration and family, he has let us all down; and it’s a hard lesson to learn.

The thing about Trump is that he has always been the dumb one with money. This has given him a slight edge because he could ramp up his survival skills. The only thing that he knew would always work is to throw a constant state of chaos into the mix to distract everyone while he accomplishes what he wants in the background. It is a combination of simplicity and turmoil, and this is what has made Mueller’s responsibilities so complex. There isn’t just a couple of rabbit holes to investigate, but thousands upon thousands, some designed to redirect and others to hit the goals.

We know that Trump couldn’t pull this off by himself, he is just not smart enough; and even hiring outsiders to try to direct the sham only ever had one goal: profit. However, when you add in the Russian IRA who recognized that supporting the orange man, along with Sanders and Stein, by salting the campaign with conspiracy theories and outright lies about Hillary, Putin would be closer to his goal of the destruction of Democracies around the world. In this part, Trump played the clown and mainstream media along with the rabid right-wing followers, ate it up. One could say that it was a timely formula.

Over the last number of months, we saw many testifying as well as indictments flying in all directions. Each one gave us a moment of optimism; that ultimately good would win over evil. Michael Cohen’s continued statements and information releases added to these feelings that in the end, Trump and his horrid followers, along with the spineless Republicans who support him, would be done and this Twilight Zone existence would end.

The Problem with Trump’s Narcissism and Mental Decline

Everyone around Trump knows that he is and always has been a narcissist, and Putin knew how to play that card to the hilt. All you have to do to gain Trump’s interest is to ply him with a number of compliments and he is putty in your hands. In this, Trump became the useful fool that someone as incredibly savvy as Putin could manipulate. Add to this the fact that Trump admires authoritarian figures, including Putin, Kim Jong-Il and even Hitler, and this was Putin couldn’t have asked for a better shoe in.

Those in the White House is painfully aware of the fact that Trump is suffering from mental decline. Those in close contact with him watch as he repeats things over and over again, thinking that he hasn’t said them the first time, and even went so far as to call an outside psychologist to enlist her help in diagnosis and possible treatment. The combination of mental decline and narcissism has created a scenario where Trump invents stories that he believes are true and expects others to take them as fact, even though they are complete fabrications. I am including the information because this has made Mueller’s job all the more difficult.

In most cases, the law is very clear when it comes to obstruction of justice. However, the lame and pitiful excuse that the conservatives are using to protect both Trump and Donny, Jr. is that they were “unaware” of the fact that they were breaking the law and the latter was just too stupid to know better. In what area of life does this work? If you are hauled in by the IRS and they find something that is not allowed, the will NOT accept “ignorance” as an excuse. If there is a crime committed and the police show up, “ignorance” is not a reason that is acceptable in a court of law as a defense. But the orange idiot and his clown bus of a family can use that to excuse their blatant disregard of the laws of the land?

The Aussies like to call him the “orange $hitgibbon,” and yet we are watching as this horror of a man and his greedy profit mongering family pillage our country, remove all safety barriers, open the doors for corporations to steal and plunder…all the while, his trumptroll cult supporters cheer on. Nothing that he or the Republicans do is bad enough for them to complain, because as long as “the economy is doing great,” they will ignore the racism, bigotry, sexism, and hate. 23 years of Fox brainwashing propaganda has transitioned the willing into mindless, knuckledragging, cult supporters, and they will follow Trump over the edge of the cliff if he asked them to jump.

Conservative Right and Extreme Left are BOTH Cult Members

The long game of the Russian IRA (Internet Research Agency) has been occurring for many years, and they found the perfect targets in the right and extreme left ideologies. Both share the same form of psychographic validation of their belief systems, refusing to fact check or confirm what is fed to them. This is one of the reasons that the IRA devoted millions of dollars into the Trump, Sanders, and Stein campaigns as well as going so far as to back and create organizations that supported these candidates. They crafted the same anti-Hillary messages, articles, memes, and videos to both sides, and they were very successful.

If you take a moment to watch three short New York Times videos in “Operation Infektion,”  you will see that these segments of our society have been played. The question has to “why” has been covered in a number of articles that I have written, but it all boils down to the fact that these factions of our society are the easiest to confuse and lie to.

We should NEVER have elected Trump, and to be honest, I don’t think that we did. Evidence is slowly creeping out that voting was hacked in the three states that were statistically impossible for Trump to win: Michigan, Wisconsin, and Pennsylvania. He supposedly won all three by 1% and these were the same three states that are involved in investigations regarding Russian interference.

All you have to do is spend just a small amount of time talking to both the Bernie and Trump supporters to realize that their mentality is SO close that it’s scary. Both are extremists and both refuse to hear anything that could cross the line for their candidate. Sanders was never vetted, and he has a dark past that only a few reporters have been brave enough to bring forward, but you can bet that the Republicans have it all collected in a nice, neat box to release. That is why they want him to be the candidate and why they have been so “nice” to him. On the right you see everything from wacko religious zealots praising their God for Trump to people who live a life of constant fear of everything and everyone and therefore support any form of authoritarian figure.

What is it going to take for both of these sides to wake up? How bad does it have to get?

Optimists keep saying that the United States has survived catastrophes in the past and we will get through this one. However, those of us who have been monitoring and reporting are already seeing the next phase of Russian brainwashing with their purchase of multiple video production companies. Their goal? To target millennials. They see them as the next easy marks to sway. The Russians know that as long as social media and sources such as YouTube are unfettered, they can create lies in the form of AI produced videos and memes….and stupid Americans will believe them.

(S. Novi is a journalist who worked in the media and continues to seek out truth and integrity. A liberal and one who is suspicious of cults and empty promises. She is a member of Medium.com and a contributor to CityWatch.) Edited for CityWatch by Linda Abrams.