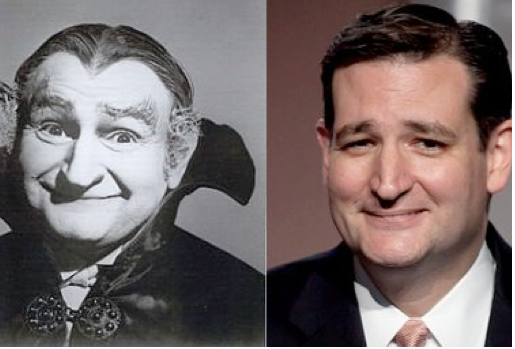 GELFAND’S WORLD--As a Californian and presumably a normal sort of person, I find it strange that Ted Cruz finished first in the Iowa Caucuses. The political experts tell us that his fellow Senators hate him and that the Republican Party fears him. And he looks like Grandpa Munster. Why would so many supposedly loyal Republican voters support him?

A good question with several answers. It turns out that one of those answers is negative for Cruz's hopes of winning the Republican nomination.

For all of their phony pretentions to legitimacy, the Iowa Caucuses destroyed last week's political foundations and created a new world. It reminds you a little of the world wars. Donald Trump, last week's Mussolini, got knocked off the winner's stand and had to settle for second place. Ted Cruz took first place by 4 points.

You have to admit that it's strange. There's just something about the guy that infuriates people. Let's start with a joke making the rounds.

Why do people take an instant dislike to Ted Cruz?

But the Ted Cruz enigma remains. He managed to win a Senate seat in a major state and has now knocked off the one person who was picked to finish first and who gets more press coverage than any two or three of his opponents combined.

Here is an article by Caroline Bankoff in New York magazine that takes a swing at the question. In essence, he is for himself even when this violates party loyalty, and he doesn't know how to be a team member. This has put some of his fellow Republican senators on the spot as Cruz has played games about shutting down the government once again. There is also an inkling of a more far reaching explanation from one of his college classmates. Cruz seems to have come to college politically formed. The beliefs he expresses today haven't changed from when he was a teenager.

But that doesn't seem to be quite enough to explain why so many of his fellow Republicans are actively trying to undermine him. After all, the rule in politics is to go with the winner if he's on your side. Republicans and Democrats alike have put up with sleaze and downright corruption when it provides the winning edge, both in D.C. and in Sacramento. Republicans understand that Cruz as president would provide a solid conservative brand of leadership, yet they still dislike him.

Like I said, Cruz is an enigma to the rest of the normal people around the country.

So what else does the Iowa result tell us?

First of all, it probably means that Ted Cruz won't get the Republican nomination, much less win the presidency. This is simply a matter of recent history. Iowa Republicans seem to vote for the most right wing sorts. They also seem to limit their choices to those who wrap their campaigns around evangelical fervor. The fact that Mike Huckabee and Rick Santorum are recent winners tells you pretty much everything you need to know. Winners in Iowa are too far right to win nationally.

There's one other lesson from Iowa that I call wolfpack ethics. In a series of debates leading up to Iowa, a series of Republican wannabes took shots at Donald Trump. They were swatted down by Trump, much as the pack leader swats down rambunctious cubs. The sorriest cub was Jeb Bush, who took such a beating that Saturday Night Live made him into an ongoing political joke. That's the way of the wolfpack. The alpha wolf defines the leadership role.

But the alpha wolf is always a potential target to be replaced. It's not a matter of if, but of when and by whom. It wasn't last month and it wasn't Jeb Bush. Ted Cruz was careful to avoid a definitive tangle with Trump in the early going.

By Wednesday of this week, everything had changed. We've all heard by now about Trump's polite concession speech on Monday night, followed by his attack on Cruz as cheater and stealer of the election the very next day. At the risk of mixing metaphors, we have Trump going through the stages of grief, this stage being denial, while Cruz gets to try out his new role as alpha wolf. You could tell that Cruz had decided that this is his moment when he pulled out the new term Trumpertantrum.

There is an old rule that applies to attacking alpha wolves. If you are going to try to replace the alpha, the one thing you must not do is lose. Cruz is taking a chance in coming back at Trump just a few days before the New Hampshire primary election. If Trump should win, then he will be in a position to retake the alpha position.

Trump has deftly set this situation up by claiming that the Cruz victory in Iowa was fraudulent. We can expect that come Tuesday night in New Hampshire, a victorious Trump will remind television viewers that this time, justice has triumphed. If Cruz should manage to pull off a miracle and beat Trump on Tuesday, then we can expect Cruz to give us an even louder wolf howl.

And then there were the Democratic caucuses in Iowa. It's hard to call this anything but a dead draw. That might be enough for Hillary to call it a victory. It might also be enough for Bernie to call it the beginning of a political revolution. Whatever happened in Iowa is probably of little consequence in New Hampshire this time around. That's because New Hampshire voters have a strong propensity to vote for governors and senators from their neighboring states. Vermont is right next to New Hampshire, for those who didn't know. If Hillary runs close, that would signify a near-defeat for Bernie. If Bernie wins big, it's still a race.