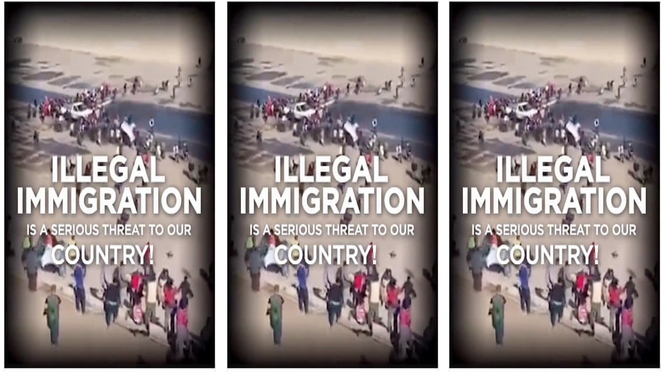 INTEL REPORT--President Donald Trump’s Facebook page ran approximately 2,200 ads earlier this year stoking xenophobia and warning of an “invasion” by immigrants ― a revelation receiving attention in the wake of the mass shooting in El Paso, Texas, in which the gunman may have been acting on a white supremacist manifesto.

One set of video ads ― of which there are three versions ― urges social media users to help fund a wall along the U.S.-Mexico border, flashing all-caps warnings that the U.S. is in a “state of emergency” and that “America’s safety is at risk.”

Above the visuals are messages claiming it’s “CRITICAL that we STOP THE INVASION” and guard the border to protect the nation.

We have an INVASION! So we are BUILDING THE WALL to STOP IT. Dems will sue us. But we want a SAFE COUNTRY!

It’s CRITICAL that we STOP THE INVASION. Nancy Pelosi and Democrats have not negotiated in good faith to fund a wall at our Southern Border, proving that OBSTRUCTION is far more important to them than YOUR SAFETY

A second set of ads, which are also videos, cautions viewers that “illegal immigration is a serious threat to our country” and encourages them to back Trump’s “America’s first agenda.”

The posts include messages claiming that a “true invasion” is happening at the border, and argue that “the Democrats and the Fake News Media just won’t listen.”

“THE TIME IS NOW. WE NEED TO SECURE OUR BORDER,” they read.

Many of the ads ran from January to March, though some were also active in May.

The ads were financed by Donald J. Trump for President, Inc. and the Trump Make America Great Again Committee, according to spending data from Facebook.

Trump spent $12.5 million on Facebook ads concerning social issues, politics and elections between March 2018 and May 2019, making himself the single top spender for that time period in that category, according to an analysis released last month by U.K. research firm Comparitech.

Trump’s “invasion” ads are no longer active, but they have come back into focus this week in light of the El Paso shooter’s alleged manifesto, which labels immigrants as “invaders” and rails against “the Hispanic invasion of Texas.”

“They are the instigators, not me,” it says. “I am simply defending my country from cultural and ethnic replacement brought on by an invasion.”

The four-page screed also includes the phrase “send them back,” a version of a rallying cry that broke out at Trump’s North Carolina campaign event last month after he urged four congresswomen of color to “go back” to “the totally broken and crime infested places from which they came.”

The suspected gunman, a 21-year-old white male, killed 22 people at a Walmart on Saturday, and may have shared the manifesto online shortly before the killing began.

Trump is named in the document, but its author states that his views predated the president’s election, and there is no evidence to suggest that the ads influenced the shooter.

In a Monday news conference addressing the massacre as well as the mass shooting that took place over the weekend in Dayton, Ohio ― in which a gunman killed nine people and injured dozens of others ― Trump called for the nation to “condemn racism, bigotry and white supremacy.” However, he made no mention of his part in both allowing and encouraging those ideologies to thrive.

Facebook did not respond to HuffPost’s several requests for comment on whether the ads violated its community standards, whether the platform saw them as a form of hate speech or xenophobia and whether it would take action in the future to stop such ads from being posted.

(Amy Russo writes for HuffPlost where this piece originated.)