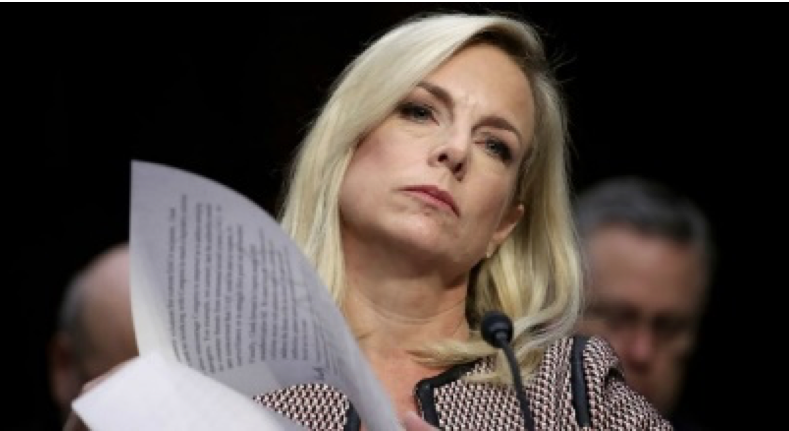 CHATTERBOX--In a "heinous lie" aimed at distorting the historical record and avoiding responsibility for the mass cruelty perpetuated on her watch, Department of Homeland Security (DHS) Secretary Kirstjen Nielsen falsely claimed in a series of tweets late Sunday that the Trump administration does "not have a policy of separating families at the border."

"2000 kids didn't voluntarily decide to leave their parents. You forced the separation. Get it?" —Rep. Ted Lieu

"This misreporting by members [of Congress], press, and advocacy groups must stop. It is irresponsible and unproductive," Nielsen wrote, neglecting to mention data from her own department showing that nearly 2,000 children have been separated from their families in just six weeks due to the Trump adminstration's so-called "zero tolerance" immigration policy.

Lawmakers, activists, and reporters who have persistently highlighted and denounced the Trump administration's family separation policy—which was officially unveiled byAttorney General Jeff Sessions in May—were quick to call out Nielsen's blatant lie on Sunday, pointing out that a quick look at her department's website is enough to expose the falsehood.

Prominently featured on the DHS's "fact sheet" for its zero tolerance policy, dated June 15, is the question: "Why Are Parents Being Separated From Their Children?"

Todd Schulte, president of the advocacy group FWD.us, added that the DHS website also contains a flyer outlining "the steps a parent in Border Patrol or ICE custody can take to locate their child, once said child has been separated from them."

"This is a lie," Sen. Ed Markey (D-Mass.) concluded in response to Nielsen's tweet on Sunday. "There is no law. There is no court mandate. This is a policy made solely by this administration, and you can stop it right now. And every second you don't you are directly responsible for unimaginable amounts of misery. Period."

"You have a policy of criminally prosecuting any asylum seeker who crosses the border between ports of entry. Period. Parents go into custody and kids are shipped off to facilities—over a misdemeanor."
—ACLU

By attempting to deny the very existence of the Trump administration's family separation policy, Nielsen flatly contradicted statements from other White House officials like Chief of Staff John Kelly and senior policy adviser Stephen Miller, who have celebrated the practiceof ripping kids from their parents' arms as a strong "deterrent" against border crossings.

And as many were quick to point out following her tweet on Sunday, Nielsen herself acknowledged the policy that she now claims doesn't exist in an interviewwith NPRjust days after Sessions announced the White House's "zero tolerance" plan.

"Operationally what that means is we will have to separate your family," Nielsen said, referring to the Trump administration's decision to refer for criminal prosecution all immigrants who cross the border illegally.

Responding to Nielsen's lie on Sunday, the ACLU explained, "You have a policy of criminally prosecuting any asylum seeker who crosses the border between ports of entry. Period. Parents go into custody and kids are shipped off to facilities—over a misdemeanor."

(Jake Johnson writes for the excellent Common Dreams … where this report was first posted.)