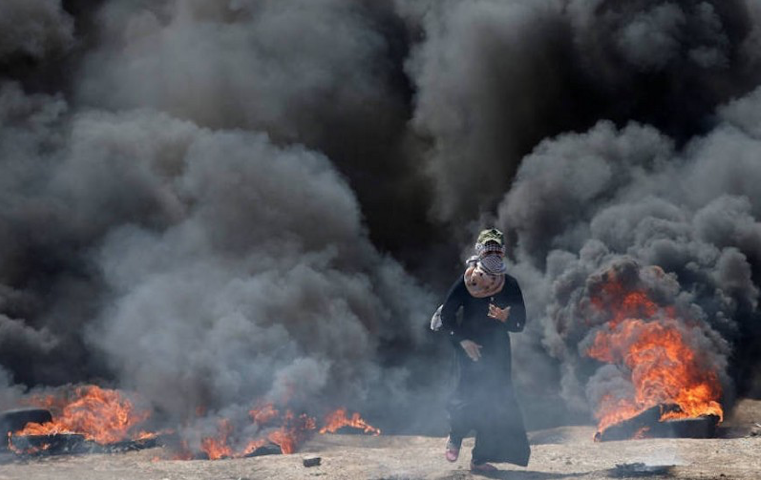 CHATTERBBOX--President Donald Trump said on Monday that he was working directly with God, “as well as with several of His best right-wing pastors,” to hasten the “end-times” events prophesied in the Bible.

Dr. Robert Jeffress (left), pastor of First Baptist Church in Dallas and a raging bigot, gave a prayer in Jerusalem on Monday to kick off “end-times” events. (Credit: cbn.com)

The apocalyptic prophecy, popular with white evangelical Christians who also happen to be the president’s base, states that the world will turn black with evil, people will descend into a swamp of immorality and violence, and the boastful, arrogant, and unholy will reign. At that point, Jesus Christ will appear, scold the masses, then whisk all true believers up to heaven with him in what conservative Christians call “The Rapture.”

As thousands were wounded during protests in Gaza, Ivanka Trump looked beautiful at the Jerusalem opening wearing a two-piece ensemble by Versace. (Credit: nytimes.com)

All this excitement, according to Christians who see Mr. Trump as their very own “end-times master of ceremonies,” is supposed to kick-off in Jerusalem. That ‘s where the Trump administration held an elaborate ceremony on Monday for the opening of the new U.S. embassy, which was previously located in Tel Aviv. That triggered massive protests by Palestinians and an aggressive response by the Israeli army that left more than 50 dead and thousands wounded.

In response, President Trump, speaking from Washington, said: “I’m very excited to be working with my white Christian friends to move up the timetable for end-times. As I watched my beautiful daughter Ivanka on television today dedicating our new embassy, and saw on split-screen hundreds of bad, terroristic Palestinians being justly killed by brave Israeli soldiers, I knew that our beloved Rapture couldn’t be far behind. It’s coming soon, my friends, but if we’re not raptured up by the mid-term elections, please remember to vote Republican.”

Asked if he would be going to Jerusalem personally to pour gasoline on the fire of Mideast tensions while awaiting the arrival of Jesus, Mr. Trump said, “I definitely would like to, but let’s see what happens.”