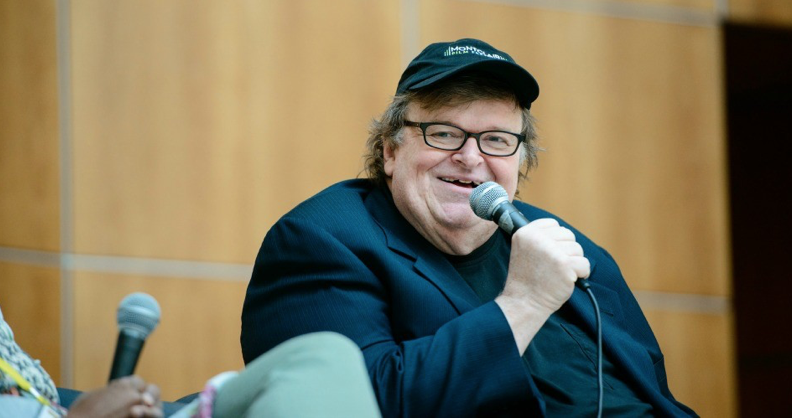 CHATTERBOX--Filmmaker and activist Michael Moore warned comedian Roseanne Barr and President Donald Trump that his next film will involve both of them, a day after the president waded into controversy over a racist tweet posted by Roseanne.

On his Twitter and Facebook accounts, Moore posted a video from Roseanne's late 1990s talk show, "The Roseanne Show," featuring both Moore and Trump.

In the clip, both Roseanne and Trump praised Moore's 1989 documentary Roger and Me,about the downfall of Flint, Michigan following General Motors' closing of several plants in the company town. But Trump added, "I hope he never does [a film] on me though."

Trump will have no such luck, Moore revealed.

Moore's message came a day after Roseanne's eponymous sitcom was canceled by ABCfollowing her tweets about former Obama aide Valerie Jarrett, Chelsea Clinton, and Moore himself—and hours after Trump accused the network of allowing media attacks on him to stand.

Like Trump, Moore wrote in a Facebook post, Roseanne "went on a Wild White Racist tear during the Obama years." He continued with a cryptic teaser for his upcoming film and a message about Trump's potential exit from the White House.

"Did you ever wonder why, in 2011, NBCdidn't fire Donald Trump when he launched his racist birther movement, declaring the president a Kenyan and a Muslim?" he wrote. "Roseanne, the viscous [sic] slur at me you retweeted yesterday—if I had the time I'd sue you and drain you of every dime you have. But I've got a better idea. As they say in the movies: one down, one to go."

(Julie Conley writes for Common Dreams  … where this piece originated.)