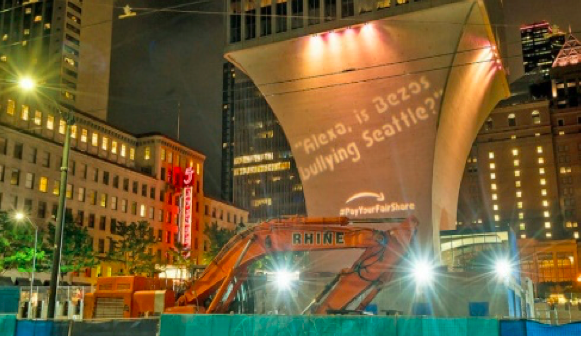 CHATTERBOX--Sen. Bernie Sanders excoriated Amazon founder and CEO Jeff Bezos in a damning video tweet this week that zeroed in on Bezos’ personal wealth and his company’s unfair economic advantages.

The company is sensitive to such accusations and tweeted back defensively, “We’ve created over 130K new full-time jobs in the last year alone. Good jobs w/highly competitive pay & full benefits.” What Amazon didn’t mention is that a significant percentage of its employees rely on food stamps, in a trend reminiscent of Walmart. It also failed to mention that it fought tooth and nail against a modest tax bill to fund housing for the poor in Seattle, where it is headquartered.

In fact, the Washington city’s tax fight with Amazon is a critical lesson for how cities around the country can take on corporate behemoths and win. Amazon’s presence in Seattle has resulted in an influx of highly paid tech workers, which has in turn fueled gentrification, raised rents and increased homelessness. With Kshama Sawant, the fiery Socialist member of Seattle’s City Council, leading the battle, the council on May 14 unanimously passed a so-called “head-tax” on large corporations in the face of stiff opposition from Amazon. The tax, which was originally proposed as $500 per employee for corporations making more than $20 million a year, was downgraded to $275 per employee when the vote finally took place. The modest revenues will help fund low-income housing and address homelessness.

The city is in crisis. A new report found that King County—where Seattle is located—needs more than $400 million to address its housing crisis, and revenues from the city’s new head tax would address some of those needs. County executives in 2015 had declared a “state of emergency” on the issue of homelessness, a designation usually reserved for devastation from natural disasters.

Sawant, who burst onto the national political scene with her bold socialist agenda, won her seat on Seattle’s City Council by calling for three major reforms, summed up by the slogans “$15 an Hour,” “Tax the Rich” and “Rent Control.” Four years ago, Sawant fulfilled the first of her campaign promises by leading the fight to win an increase in the minimum wage to $15 an hour. In an interview on “Rising Up With Sonali,” she shared with me how her second reform was achieved against massive opposition. “It was a bitterly fought-for victory,” she said of the “Amazon tax” as it became known, “because we went up against the Democratic Party establishment, the absolutely ferocious opposition of the Chamber of Commerce, of big businesses like Starbucks and especially of Amazon.”

The larger question, she added, is, “Who gets to occupy urban spaces in America?” Indeed, as the technology sector has seen record growth, the cities in which tech companies establish themselves—including Seattle, San Francisco, Portland, Ore., Chicago and others—become playgrounds for the wealthy new transplants who work the high-tech jobs. “The billionaire class—[those] like Jeff Bezos—get to enrich themselves hand over fist,” Sawant said, “while every square inch of this city gets privatized and gets more and more expensive.”

Despite Seattle’s homelessness crisis, Amazon’s opposition to the head tax was ruthless. The corporation threatened to shut down construction sites and cut jobs. It echoed the familiar conservative refrain that tax increases and higher wages would slow growth and ruin the economy. “It’s a threatening message not just to Seattle but to every city in the world,” Sawant said of Amazon’s hardball tactics. “The message Jeff Bezos is sending is that, ‘if working people in any city have the temerity to go against me and the billionaire class, then we will threaten you with taking away jobs.’ That is an attempted strike of capital.”

Sawant shared with me that in the end the tax measure passed by the City Council will generate a mere $50 million a year of the $410 million needed to combat homelessness in King County (Seattle is the county’s largest city). Of that revenue, Amazon’s share is a pittance—about $8 million. Nothing about this tax would even remotely threaten the company’s financial profile. “This tax is like pocket change for the Amazon billionaires, and especially for Jeff Bezos,” Sawant said. Bezos could lose $8 million a year personally and not even notice it.

Bezos’ wealth is so obscene that in a recent interview he boasted about having so much money that the only thing he could think of spending it on was space travel. “[W]hat does money mean for you, being the first person in history who has a net worth of a three-digit amount of billions?” asked the interviewer. Bezos responded, “The only way that I can see to deploy this much financial resource is by converting my Amazon winnings into space travel.”

If Bezos has money to burn (literally), why did Amazon, one of the largest companies in the world, oppose Seattle’s modest head tax? The battle between corporate America and working people is an ideological one, and Sawant captured the power dynamics between these two forces perfectly when she told me that “the interests of our movement and the interests of the billionaire class are not in line. There is a fundamental antagonism between the two.”

But the Democratic Party has for years been trying to convince Americans that liberalism now means that “what is good for corporate America is good for ordinary Americans.” That logic has clearly not translated into material gains for Americans who have seen their livelihoods decimated. A new report found that millennials (those born between 1981 and 1996) may never accumulate as much wealth as their parents did. What are these young Americans to do with the fact that the stock market is booming while their bank accounts are bottoming out?

Even though Amazon and its ilk managed to water down the Seattle city tax to nearly half the original amount, the movement that Sawant is leading can count on the unanimous council vote as a major victory. After all, Amazon is on the hunt for a location for its new headquarters and has warehouse locations all over the country. Instead of mayors and city councils falling over themselves to lure Amazon to their city with tax breaks, perhaps cities ought to be wary of the problems of homelessness and rising rents that Amazon’s presence could bring.

What Seattle demonstrated to other cities is that it is possible to take on a commercial giant, and, using the democratic process, squeeze taxes out of it that benefit our cities and ordinary people. After all, Amazon takes advantage of our publicly funded infrastructure to operate its business. Despite Donald Trump’s grumblings about Amazon, the president and his party passed a tax reform bill last year that gifted Amazon a whopping $789 millionin tax breaks—money that should have been part of our federal treasury. All it would take is for ordinary Americans to push their local city councils to replicate Seattle’s efforts in city after city where Amazon plans to expand.

And if the company warns it would move elsewhere or cut jobs? Sawant responded that while it is important to take such warnings seriously given Amazon’s power, “the only response is for working people in every city to say, ‘we’re not going to accept your threats because the inevitable logic of your threats is a race to the bottom.’ ” Indeed, Amazon has so far not made good on its promise to cut jobs in Seattle or stop construction on its buildings. But it did issue a petulant statement sprinkled with words like “apprehensive,” “hostile” and “anti-business.”

In the game of chicken between democracy and corporatism, Seattle demonstrated that people power can prevail. According to Sawant, “The fact that we had the nerve to go up against Amazon and win a tax in the face of their extortionary threats, that represents that you can build a movement and you can win.”

(Sonali Kolhatkar is a columnist for Truthdig. She also is the founder, host and executive producer of "Rising Up With Sonali," a television and radio show that airs on Free Speech TV (Dish Network, DirecTV, Roku) and Pacifica stations KPFK, KPFA, and affiliates. She is the former founder, host and producer of KPFK Pacifica’s popular morning drive-time program “Uprising.")