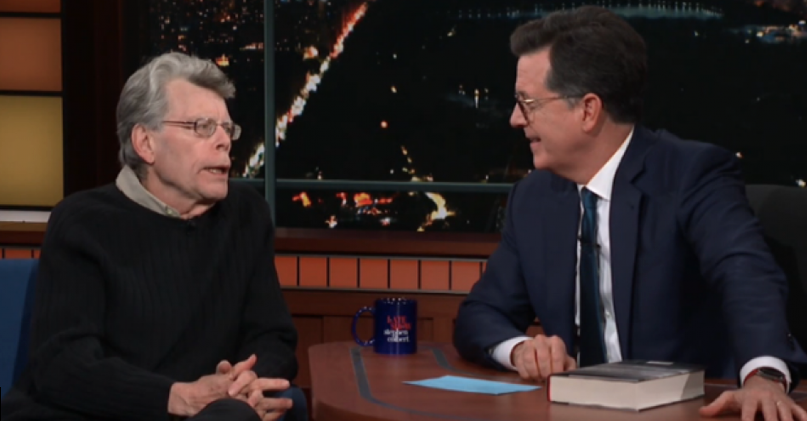 CHATTERBOX--Famed novelist Stephen King said he's not sure about going back to following Trump on Twitter and called Vice President Mike Pence a "creepy" guy. (Photo: The Late Show/CBS)

Just hours after a federal judge on Wednesday ruled it was an abridgement of people's First Amendment rights for President Donald Trump to block people on Twitter based on their political views or criticizing his behavior, novel Stephen King confessed one of the reasons he was likely among those blocked was because he once suggested the president had his head up his own ass.

"I might have said he had his head somewhere where a certain yoga position would be necessary to get it there," King joked during a segment onThe Late Showwith Stephen Colbert.

Though there's no indication yet that Trump will submit to the judge's ruling about blocking people on Twitter, King said he's not certain he'd return to the practice even if such access was returned to him. "Now we've got a President who blocked me on Twitter, except the court says he can't block anybody. So my question is, 'Do I really want to follow that guy? I don’t think so,'" King told Colbert.

In addition to a fresh round of derision aimed at Trump, King also saved some ire for Vice President Mike Pence, who the author of such horror classics as "Salem's Lot," "It," and "Pet Sematary," characterized as "creepy."

King said, "I think it has something to do with the hair. The hair doesn’t look like it has strands. It’s just there. He’s like the mean doctor on a soap opera, the one who sells drugs, you know, or has a prostitution ring from Bulgaria or something. He has that look."

(Jon Queally writes for Common Dreams  … where this piece was first posted.)