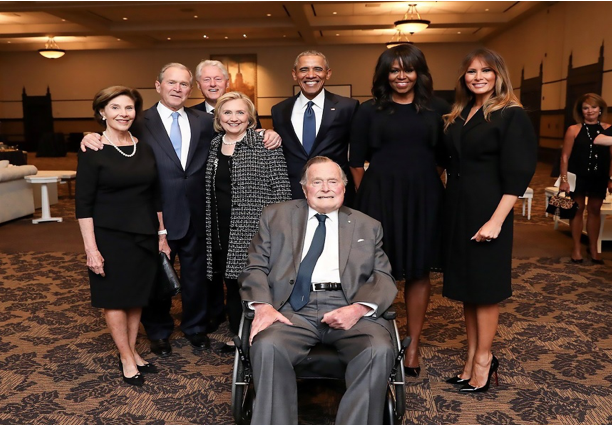 CHATTERBOX--Four ex-presidents, four first ladies. Or, something else?

Like many people, I was impressed and nostalgic when I watched Barbara Bush’s funeral service this weekend.

Impressed, because the Bush family said farewell to Mrs. Bush in a way that she would have approved (in fact, according to her minister, she helped plan the service).

Nostalgic, because of my many ties to the White House and the Republican Party that the family of President George H.W. Bush represents.

I served as an intern in the White House Press Office, and my politically moderate parents were avid Republican Party activists, fund raisers and convention delegates.

Of course, this was when the GOP welcomed a cross section of views and backgrounds, and when it was common for the Republicans and Democrats to work together on the key matters of the day.

Added to that is my interest in presidential history. I love to see the gatherings that bring together former presidents and First Ladies, from library and museum openings to conferences, to sadly, funerals.

I figured there would be ample opportunity at Mrs. Bush’s funeral for views of the former occupants of the White House to be photographed together.

And, the photo that appears to be front and center is one taken by Paul Morse, who was a White House photographer during the George W. Bush administration. (He now specializes in weddings.)

The photo, taken behind the scenes in what seems to be an events room, shows four former presidents — both Presidents Bush, Bill Clinton, and Barack Obama. They are accompanied by Laura Bush, Hillary Clinton, Michelle Obama, and Melania Trump, who attended the funeral without her husband, President Donald Trump.

By the way, it is not unusual for First Ladies to represent the White House at occasions honoring former First Ladies, even though some people wondered why Trump was golfing instead of attending the funeral.

As a historian, a former White House intern and someone interested in politics, I saw so many things in this photo. I’d love for you to post your observations at the end of this essay, too.

Here are things that jumped out at me.

Diversity. In so many ways, this photo simply says, “America.” You have whites, blacks, and a bi-racial person. You have an immigrant. You have the child of an immigrant, and the descendants of immigrants.

No, as someone pointed out, there are no Latinos in the photo, although there are Bush family members who are Latino. There are no Asians, although President Obama spent some time in South Asia.

There is geographic diversity, as well. You have four people whose youth and young adulthoods were spent in American’s urban northern cities. There are five people with roots in the South (I’m including Texas in the South, although we know Texas is its own special place.)

Just think, if the Carters had been able to attend, the photo really would have tilted on a southern axis. But the Northeast is represented, too, in the Bush family’s love of Maine, and the New York residences of the Clintons and Mrs. Trump.

There are people with rural roots. People who came from less-wealthy backgrounds and worked their way up. People who left one part of the country in search of success in another.

Cordiality. I hadn’t noticed this until a friend pointed it out, but look at the four people on the left hand side of the photo, the Bushes and the Clintons. George W. Bush has his arms around two people, while Bill Clinton is standing very close to that group, signaling that he is part of it.

To be sure, the Bushes and Clintons have become friendly since the Bushes succeeded the Clintons in the White House. But, they’re also four people who lived in hospitable places, Texas and Arkansas.

It’s kind of a contrast to the Obamas and Mrs. Trump, although there’s nothing in their bearing to show any kind of hostility, far from it. All three are smiling, as if the photographer interrupted a conversation to have them pose.

Likewise, President Bush Sr. looks perfectly pleased to be there, although it is a very sad day for the family. He’s pulling it together, as my late mother used to say when it was time to go out and give a speech or meet a crowd.

Non-partisanship. This photo of Democrats and Republicans smiling together seems unusual today, but when I was growing up, you saw pictures like this all the time.

Last week, I watched a documentary onPBS Frontline about John McCain. It mentioned that although he was a conservative from Arizona, he was an active participant in bi-partisan efforts to pass important legislation.

That’s the GOP that I grew up in, and which apparently no longer exists, much to my regret and that of people who would still like to play a role in elective politics.

If you ever wondered what those days were like, this photo represents them beautifully.

Respect. There were many images from Mrs. Bush’s funeral that bore this out, but one thing they all had in common was that people were appropriately dressed and comported themselves perfectly.

If they hadn’t, there might have been a lightning bolt from the skies sent by Mrs. Bush (with my mother most likely handing it to her).

Look across this group. The women are in modest dresses and suits, nothing too short or tight. The men are in suits and ties. This is how you dress for an important occasion.

I’m going to keep this photo in my iPhone archive and take a look at it, whenever the climate in Washington gets too turbulent, and my hopes for the future are shaking.

This world — the world I grew up in — still exists, and this photo proves it. Someday, I hope this photo will no longer seem like a rarity, but the way we’ve become, again.

(Micheline Maynard is a Journalist. Author. The Check blog on Forbes.com. NPR and NYT alum. She is a Medium member … where this piece was first posted.)