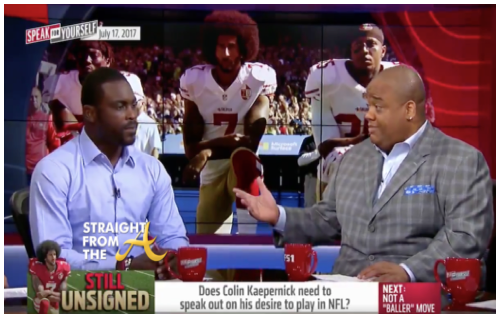 It was a perfect time to announce uncomfortable news. The NFL approves (read: embraces) Fox Sports’ hiring of former NFL quarterback and felonious dog torturer Michael Vick (above left) as a studio analyst for the upcoming season.

That’s the same Michael Vick who, just a few weeks ago, chastised currently unsigned quarterback and social activist Colin Kaepernick who, of late, is best known for not standing during his games’ national anthem in protest of police brutality against minorities.

From USA Today over the weekend:

Vick already made news on one of FS1's studio shows, Speak for Yourself, in July when he said that free-agent quarterback Colin Kaepernick should “cut his hair” and “just go clean-cut." Kaepernick, who sat out the national anthem last season, remains unsigned after he opted out of his contract with the San Francisco 49ers.

While Vick later apologized under pressure for his comment, the NFL denies but appears to be blackballing Kaepernick, who, while not the Super Bowl-level player he was a few years ago, is well within the talent level it takes to play.

Sports leagues have final say over who calls their games, serves as studio analysts and sideline reporters, etc. If the NFL didn’t approve of Michael Vick, he wouldn’t be employed by Fox Sports.

In both instances, supporters of Vick and Kaepernick have said that they “have a right to work” in the NFL. Untrue. They and other NFL players who stepped in it certainly have a right to try and seek work in the NFL, but they are not actually entitled to it.

But by embracing the sadistic Vick and disregarding his victims, while not figuring out a solution for Kaepernick and those for whom he silently but visibly speaks up, what does it say about the values of the NFL? It speaks volumes.