LA POLITICS--“At this very moment, an individual on your staff is doing something illegal or improper or engaging in behavior that you, as boss, would hate.”

As reported by David Zahniser of the Los Angeles Times, federal prosecutors have issued subpoenas to five members of Ms. Martinez’s staff, “asking them to appear before the grand jury to discuss her recent reelection campaign.”

I, for one, am not surprised by this revelation.

Earlier this year, I wrote in CityWatch that Ms. Martinez’s staffers collected, over a period of two weekends in November, most of the 1,000-plus signatures she needed to qualify for the March 2015 ballot.

What I did not mention at the time, due to content and organizational constraints, was the extent to which the councilwoman’s staff participated in the signature gathering process and the Twitter message Ms. Martinez released on November 18, 2014, thanking “Team Nury” for putting her on the ballot.

With the exception of two, possibly three, staff members, every individual presently working for Ms. Martinez collected voter signatures on the weekends of November 8-9 and November 15-16. A total of 86 nominating petitions were submitted to the City Clerk’s office, 8 of which were submitted by 5 non-staff members. One James Dantona of Simi Valley, presumably Ms. Martinez’s chief of staff, turned in 5 petitions.

(I filed a public records request with the City Clerk’s office on January 8 of this year to view the petitions; the Election Division allowed me to examine them on January 15.)

“Who cares?” one might say. “These staffers were off the clock.” 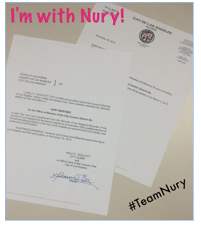 Yes, but the problem is that Ms. Martinez’s staffers functioned as the campaign, at least during the early part of the race. The councilwoman said so herself in a message she tweeted on November 18. “Thank you #TeamNury!” she wrote. “Bc of our work, I’m the first in the City to qualify for the ballot w/ >1,400 sigs!”

Let me be clear: I am not suggesting that the information presented here has anything to do with federal prosecutors wanting to talk to Ms. Martinez’s employees. For all I know, the aforementioned facts are irrelevant to the U.S. Attorney’s investigation.

What I am saying is that these actions raise questions—questions that might help us understand the fed’s interest in Ms. Martinez’s reelection campaign: Did the councilwoman prod her staffers to engage in campaign-related activities? When did attending to constituent business end and campaigning begin? Did the city lawmaker or her staffers (or both) coordinate campaign activities with the independent expenditure groups supporting Team Nury?

Past performance is a good indicator of future performance. The behavior documented in these pages, coupled with prior shameless incidents involving Martinez’s staffers, suggests that the councilmember and her aides are setting themselves up for more serious problems down the road. And problems, I suspect, are not what Chief of Staff Jim Dantona needs. Mr. Dantona is running for State Senate seat 27, which covers portions of the West San Fernando Valley. The individuals and special interests that supported his boss are now supporting him.

According to online records from the California Secretary of State’s office, 5 Martinez staffers have donated to the campaign. The Lamar Advertising Company of Baton Rouge, Louisiana, which spent more than $7,000 to support Ms. Martinez, sent Team Dantona a check for $1,000. And Valley developer David Spiegel, who provided $20,700 to the Martinez reelection effort, cut a check for $4,200.

It will be up to the voters of Senate District 27 to make sense of these emerging developments. It will be up to them to check the westward drift of money, man, and ego—that toxic combination so prevalent in East Valley politics.

Ultimately, Ms. Martinez bears responsibility for the unsavory actions of her staffers. Employees take cues from their boss, and Ms. Martinez, as boss, either condones such pathetic behavior or ignores completely the inner-workings of her council offices.

For political veterans and newcomers wishing to avoid the sort of scandals hovering over Ms. Martinez and her mentor, Congressman Tony Cardenas, I offer these words: Don’t Do Stupid Stuff.

(Dr. David M. Rodriguez is a diplomatic historian. Disclosure: he supported Nury Martinez’s opponent, Cindy Montanez, in the race for Council District 6. A resident of Sylmar, he holds degrees from the University of California-Los Angeles and the University of Wisconsin-Madison and is an occasional contributor to CityWatch.)