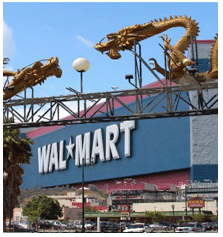 PEOPLE POWER - Walmart might have viewed their plans to open in an existing building in Los Angeles Chinatown as a bullet-proof strategy. The retail giant would open its new store in the Grand Plaza, an existing building, that unlike new construction, would allow the retailer to proceed without a public hearing.

As the company worked on its renovation plans, which started last year, Aiha Nguyen at the Los Angeles Alliance for a New Economy (LAANE) and community members dug through reams of city documents.

They realized the retailer and city officials needed something central to the democratic process — a public hearing for neighborhood residents to provide feedback about the store in the Grand Plaza building.

The Grand Plaza had received about $7 million in subsidies years ago, Nguyen said, adding that a hearing and environmental requirements from a city-approved Chinatown Redevelopment Plan still apply to any new tenant.

That requirement is serving as the basis for the April 4 lawsuit that could block Walmart from opening in 30,000 square feet of space in the downtown area.

“We’re concerned about the quality of jobs,” said Nguyen, grocery campaign director for LAANE. “There is vigilance. We will fight to protect the community.”

The community groups filed suit against the city of Los Angeles, saying the permits issued for Walmart to open in the Grand Plaza, a multi-floor commercial and residential structure at 701 W. Cesar E. Chavez Avenue, lacked proper review.

“We believe we will finally get justice for Chinatown,” Nguyen said, adding that there was an attempt to “silence” the community.

She believes Walmart, which has been criticized by community and labor over the years, is trying to enter urban markets by using existing buildings to avoid the attention associated with new construction.

“APALA LA has fought this project from the very beginning because of the economic and cultural devastation that would be wreaked upon Asian-American workers, businesses and residents,” Jan Tokumaru, vice president of APALA LA, said in a statement.

“This means that special interest attempts to block our store have not only been without merit but also proven to be a waste of time and resources,” he said in a statement.

Attorneys for the city government did not return phone calls for comment by Tuesday.

LAANE, a community group that works on ending poverty, and people who oppose Walmart believe the chain wields the power of competitive pricing in neighborhoods, which can hurt the sales of nearby family and independent grocery stores by selling items at low prices and that are difficult for small businesses to match.

Also, grassroots organizations say, the retailer’s employees might not be offered enough weekly hours to cover their living expenses. “Walmart has been a driver toward part-time employees,” Nguyen said.

Los Angeles Chinatown is home to primarily Asian residents, many who speak Cantonese and Vietnamese and live on fixed incomes, as well as Latinos. There are several independent grocery stores — actually owned by moms and pops — in addition to pharmacies, bakeries and multi-family households, said Sarah Tseng, one of about 50 members of Chinatown Community for Equitable Development.

“The concern is that Walmart will be way cheaper. How will this affect other businesses? Will other businesses close?” said Tseng, a Chinatown resident who has studied urban planning.

“There are costs to consider.”

For some employees, those costs include hourly wages at Walmart, which can vary depending on position. Some company jobs pay $13 per hour or more.

While Restivo declined to say how much employees at the Chinatown Walmart would earn, he told the Los Angeles Times that its full-time employees in California can make, on average, $12.69 per hour.

Research group Ibis World has reported that a Walmart associate earns, on average, $8.81 per hour and the company employs about 1.4 million people in the country, according to Bloomberg News.

The lawsuit and community efforts also come at a time when there is national, state and local discussion about raising the minimum wage to bring more people out of poverty.

At the Grand Plaza building, renovation has started on the ground floor for Walmart’s plan to sell groceries and pharmacies. The lawsuit says Walmart is only waiting for occupancy certificates from the city before it formally opens its doors.

“Local residents continue to stop by and tell us about how they look forward to having a new grocery store option in their neighborhood,” Restivo said in a statement.

The Walmart in Chinatown is expected to create about 65 jobs and the company has received over 3,200 applications, Restivo said.

On its corporate YouTube account, Walmart has posted a video showing two managers talking about the Chinatown location and people filing applications. One manager explains that jobs with the retailer can lead to career positions.

For Walmart cashier Martha Sellers, who works in Paramount in Los Angeles County, one challenge with her employment is making sure she has a work week with enough hours so she can pay her bills. The nine-year Walmart employee earns $13 per hour.

Then, she added, her hours are reduced. “I don’t understand. Once the schedule is posted, it’s like, ‘Here we go again,” she said.

“How do you provide for your family with those kinds of hours?”

She has spoken publicly about Walmart in the past and believes that taking a stand about her working conditions is necessary, though she admitted to being scared about doing so.

As a result of her weekly schedule that can vary in hours, she prioritizes what she does with her earnings. For example, she recently paid bills and bought groceries with her last paycheck of $327. But as of Monday, she still owed her landlord $700 in rent.

“I have looked for other jobs,” she said. “But no one out there wants a 55-year-old woman with little experience.”

Diane, the manager at Ai Hoa Market, is worried that Walmart will change Chinatown’s character. “We want to save our own Chinatown,” she said by phone, declining to give her last name. “If Walmart comes, a lot of Chinatown will change.”

The conversations about Walmart have prompted many Chinatown residents to become more active in public meetings. “I take a lot of strength from business owners who spoke at City Hall meetings and said that their businesses were in jeopardy,” Nguyen said.

“Our concerns are mainly with the long-term economic vibrancy of Chinatown,” Tseng said. “It’s important that people have a say in what happens to them and not just be priced out.”

“The best case scenario is that whatever goes into that grocery space is something that contributes to the vibrancy of Chinatown,” she added.

“The best thing would be a public hearing. That’s what we’ve been asking for.”

(Brad Wong is assistant news editor for Equal Voice News where this article was first posted.)