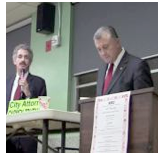 The two are both running for City Attorney; the LA Times reported in October that the race will be "intense" and "rancorous." Greg Smith, a lawyer, is also running, but did not attend the SOHA meeting.
The debate was divided by the moderator into three sections: opening statements from the candidates were followed by the two asking each other questions, and this was followed by moderator-read questions from the audience.
They talked about their positions on a variety of issues, from recent changes in parolee supervision law (AB 109), the salary for the position of City Attorney and the problem of school truancy to how they voted on election propositions like the abolition of the death penalty, labeling genetically modified food and Measure J.
(Read the rest and check the video out here)
-cw
CityWatch
Vol 10 Issue 92
Pub: Nov 16, 2012